I am always looking for something to do and so I signed up for Visit Philly newsletter and they have a section, “Things To Do This Weekend” and a mural tour caught my interest.

With my past international trips, I would do a Graffiti tour. It is one of the ways to experience the neighborhood and find hidden spots. Well, Philadelphia offers several of these tours through Mural Arts of Philadelphia.

I decided on the West Philly tour because (well), I haven’t had a chance to explore the area yet. I could kill two birds with one stone. Also, another opportunity to take the subway to the meeting place. (I am so loving public transportation.)

The tour is about 90 minutes and it cost $24. The walking tour took us through the neighborhood of University City, Powelton, Mantua, and Belmont. During the tour, we learned the stories behind the murals, the artists, and how the Mural Arts program evolved to impact the Philadelphian neighborhoods.

The first mural and our meeting spot is of Richard Allen. Bishop Allen is the founder of the African Methodist Episcopal Church (A.M.E.) 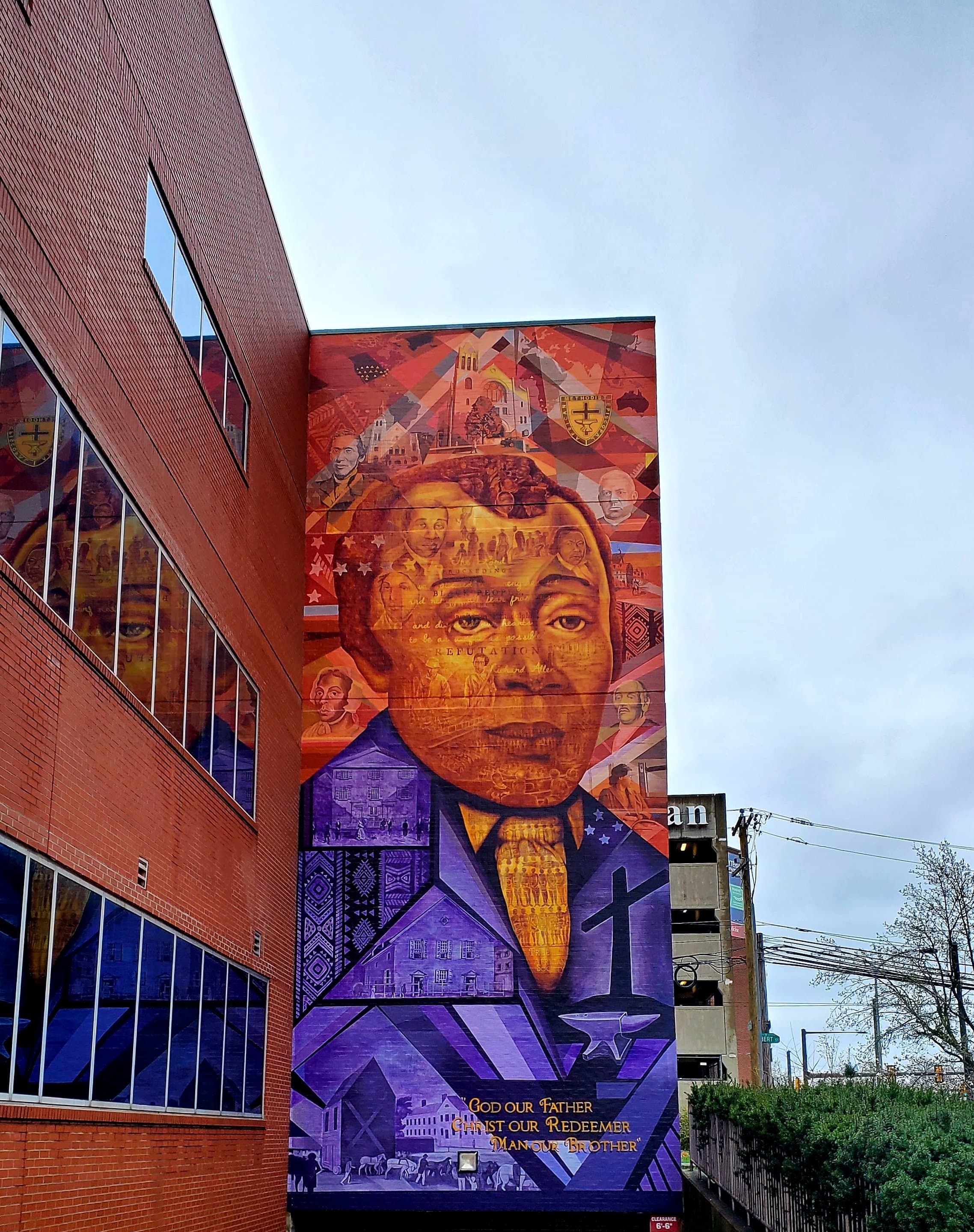 “In partnership with the African Methodist Episcopal Church and First District Plaza, Mural Arts has created a mural honoring the legacy of minister and activist Richard Allen.

Members of the AME Church collaborated with muralist Willis “Nomo” Humphrey to design a mural that stimulates dialogue about Richard and Sarah Allen’s importance in American history.” 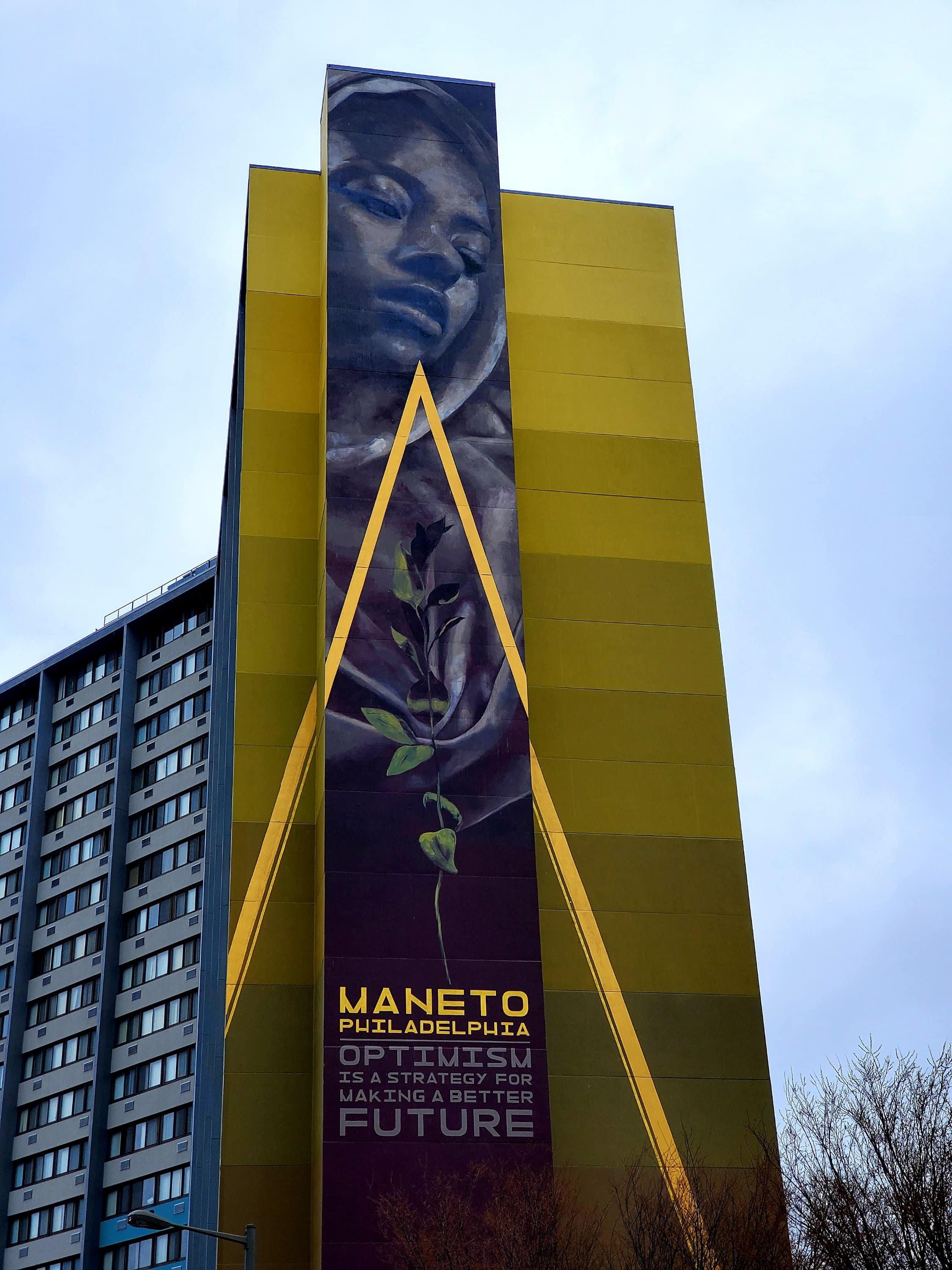 “In a city known for its strong neighborhood identities, artist Faith XLVII has created a new visual landmark at the gateway to University City in West Philadelphia.

The Silent Watcher is 11,000 square feet, standing 19 stories tall, with a series of lights that keep the image visible after dark: a woman looks down with a caring gaze on the east side of University Square, an affordable housing complex for seniors.

Faith XLVII was inspired by the cultural, historical, and social aspects of the neighborhood, and included the words “Philadelphia Maneto” from the City’s official seal, meaning “Let Brotherly Love Endure.”

Tuskegee Airmen: They Met the Challenge 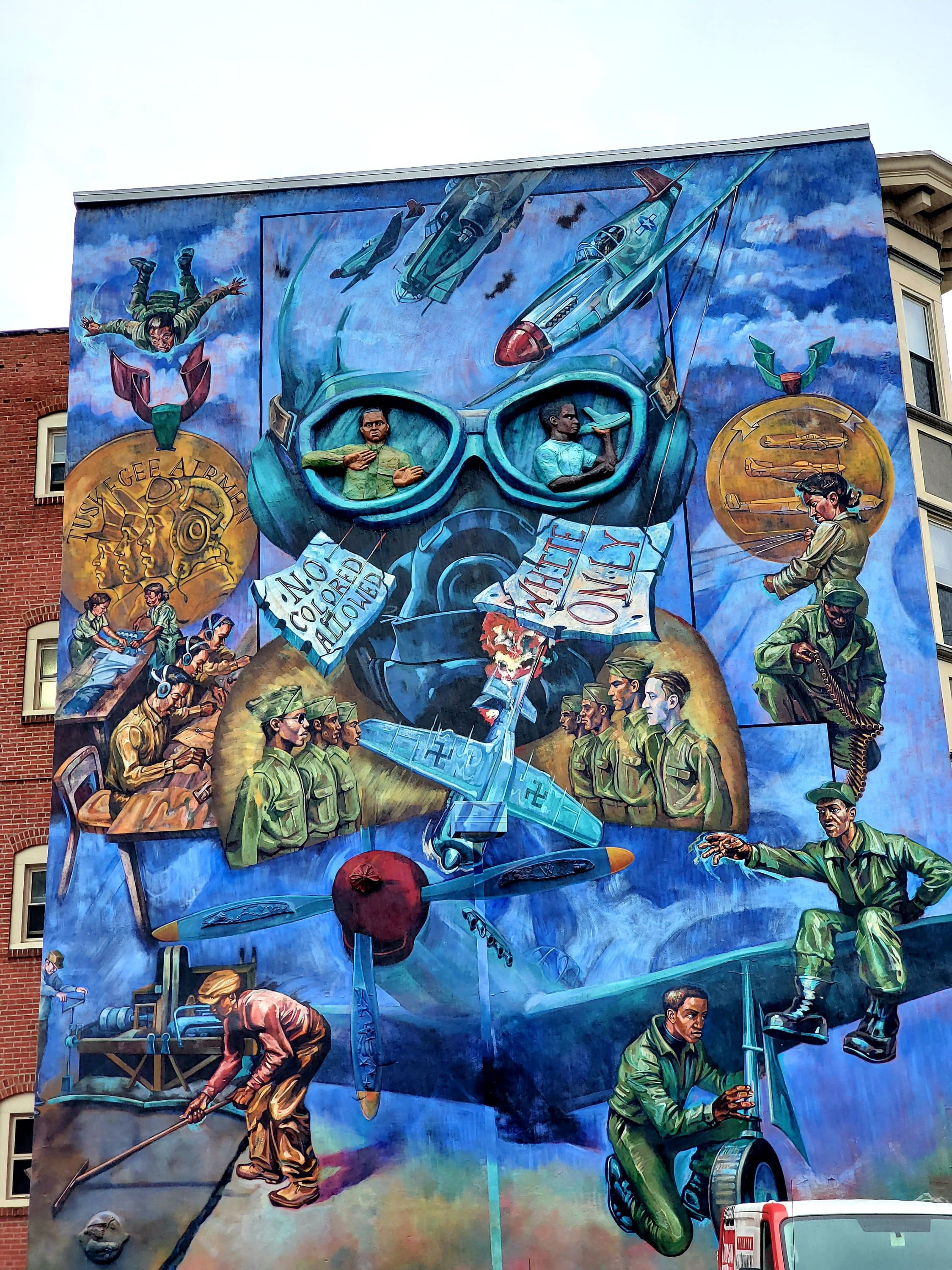 “They Met the Challenge pays homage to the Tuskegee Airmen and their message of perseverance to rise above adversity, racism, and unfair training and performance expectations in the US Armed Forces.

The artist Marcus Akinlana worked closely with the Philadelphia Chapter of the Tuskegee Airmen. The design incorporates their images as young men, uniformed pilots, at work and in flight, along with representative images of the myriad challenges they faced at home and abroad. The mural was created by artists Willis “Nomo” Humphrey and Keir Johnston.

“Inspired by President Obama’s nationwide My Brother’s Keeper Community Challenge, Building Brotherhood: Engaging Males of Color is a new initiative that encourages dialogue amongst men and boys of color.

The project has helped to raise awareness of the issues men and boys of color face in gaining access to education and jobs.

Soul of the Black Bottom “The mural’s name, Soul of the Black Bottom, comes from the neighborhood’s history of demolition and displacement.

Home, identity, and displacement are concepts that affect us all in different ways. The mural is from internationally-renowned artist eL Seed. His trademark “calligraffiti” style, brightening a West Philadelphia wall and opening up a conversation. “

Boy with the Raised Arm 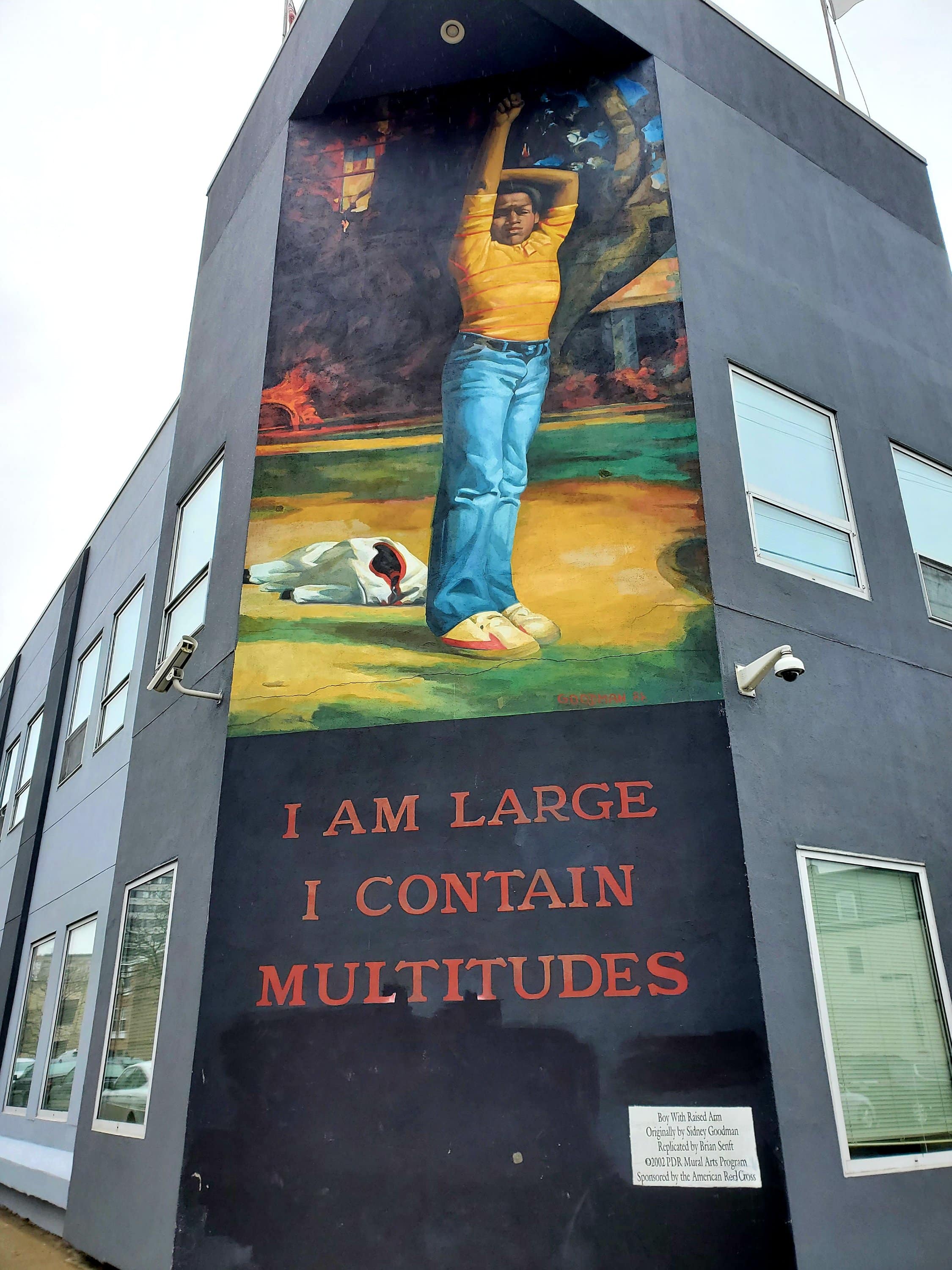 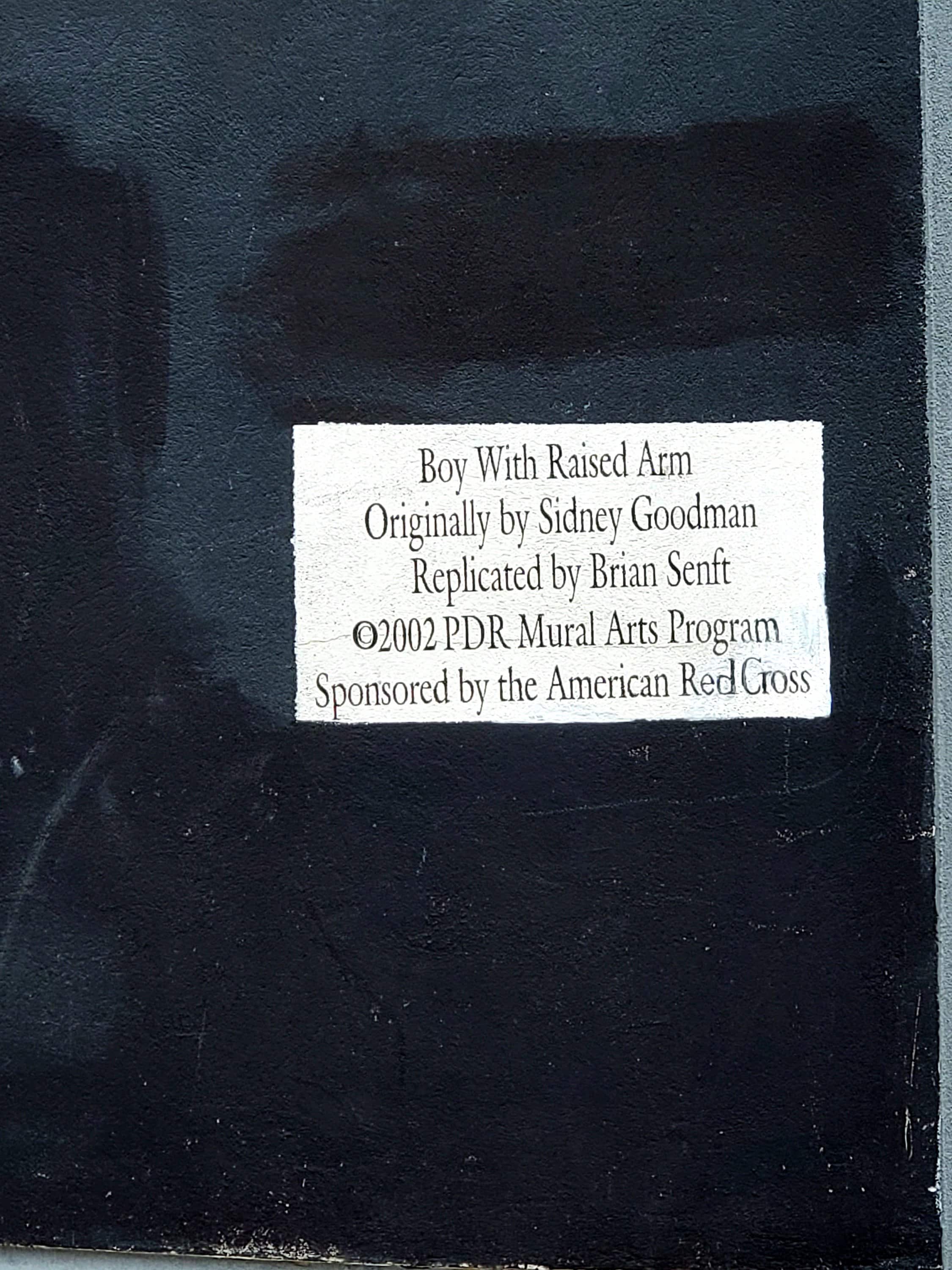 “Designed and painted in part by Philadelphia resident and internationally acclaimed figure-artist Sidney Goodman, Boy With Raised Arm was painted in 1990, but later lost to construction.

In 2002, the mural was recreated by artist Brian Senft at the corner of 40th Street & Powelton Avenue.” 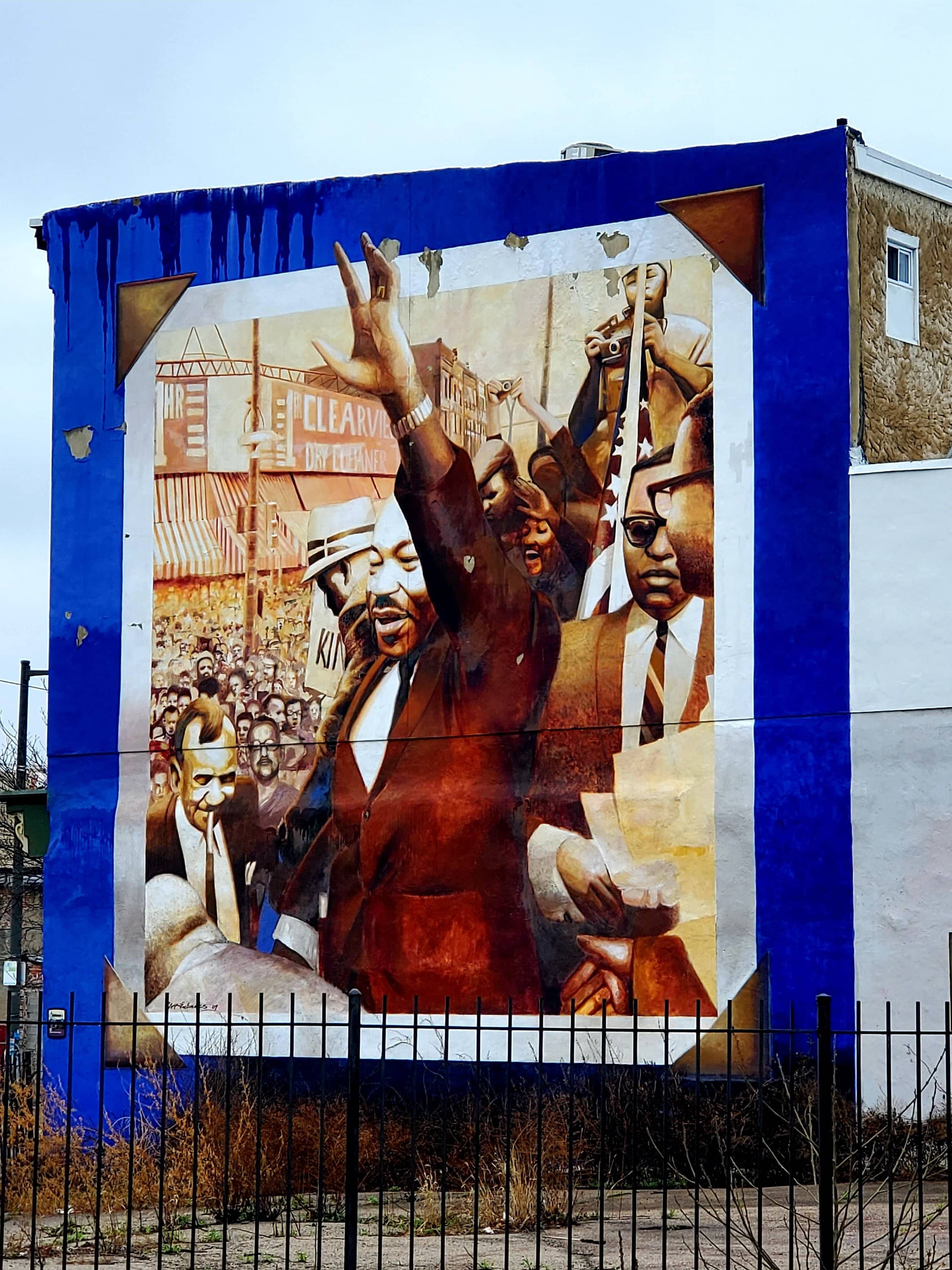 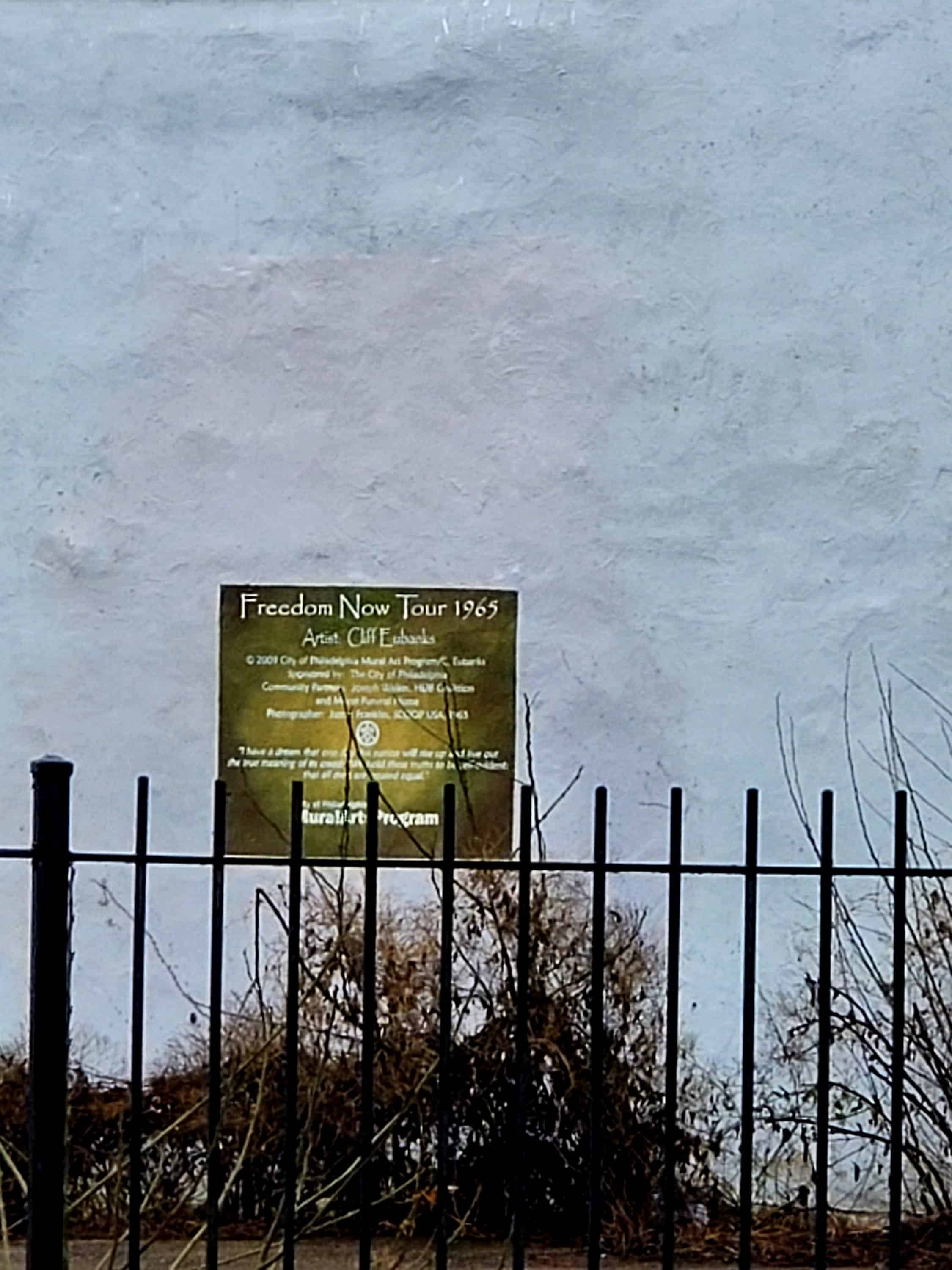 MLK, Jr. gave a historic speech at this intersection in West Philly in 1965.   His visit drew a crowd of some 10,000 Philadelphians to the corner of 40th and Lancaster.

King spoke of the need for “freedom now” in Philadelphia. The memorable speech is now marked by this mural by Cliff Eubanks, called “MLK at Lancaster.” 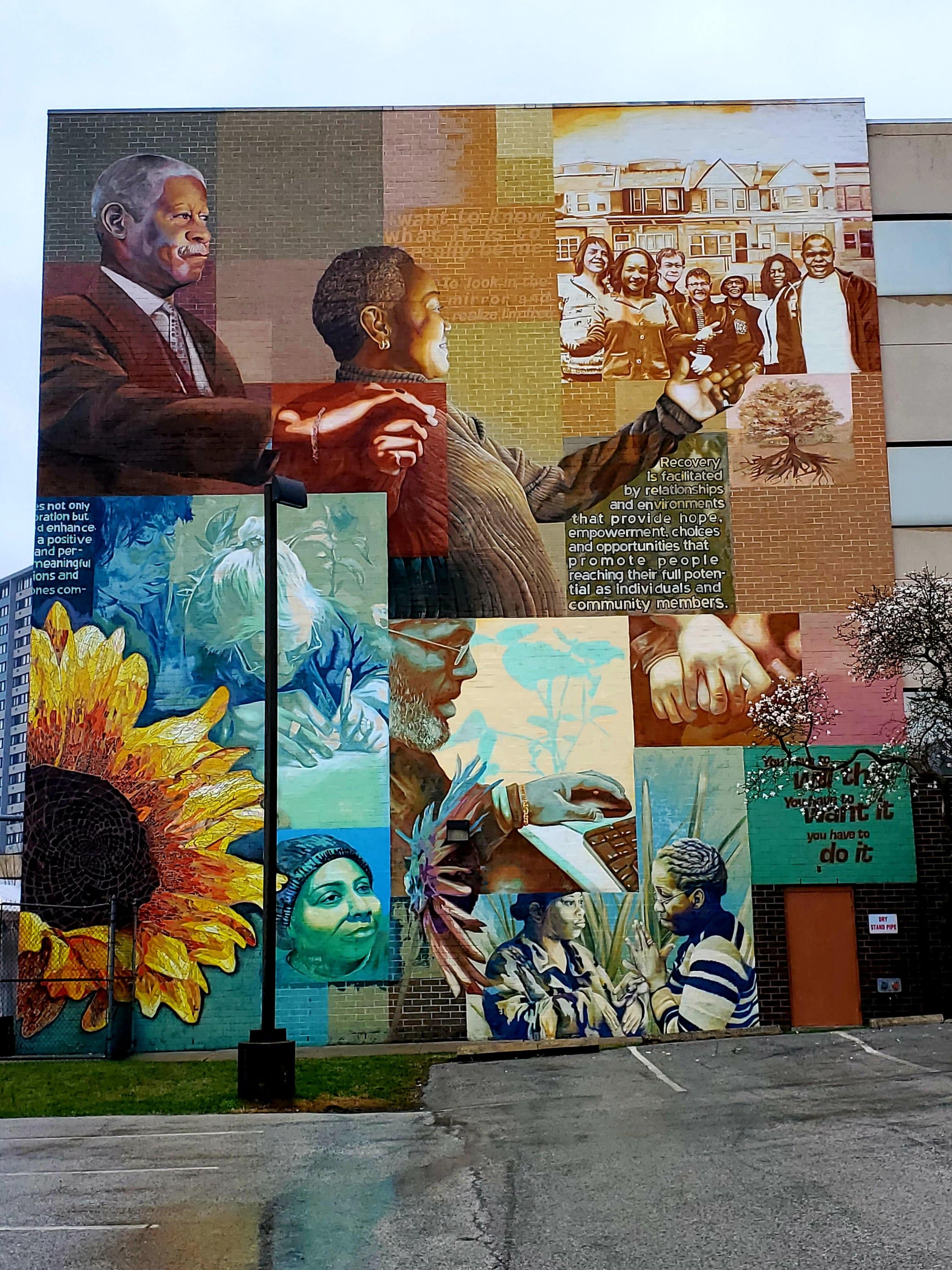 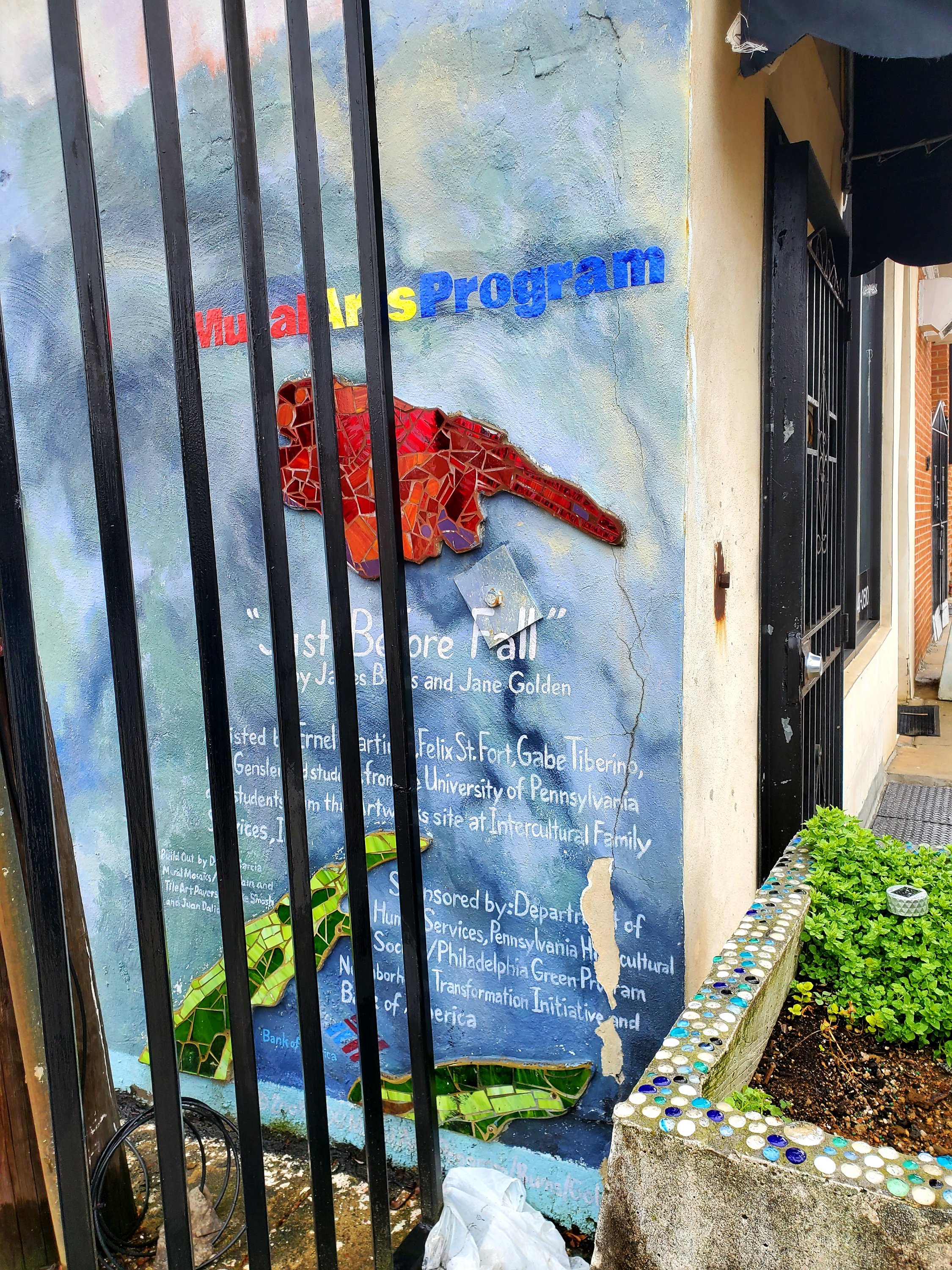 The last mural was “Wow”. While on the walking tour, we passed the first Ronald McDonald House as well as other murals. Philadelphia has over 4000 murals. I was fortunate to get a glimpse for about 90 minutes. If you are ever in the city of Brotherly Love, make sure to catch one of the mural tours by visiting muralarts.org.

Thank you so much for reading this blog and joining me in my Philly adventures! Make sure to check out my other blogs and contact me when you are ready to travel domestically or internationally. I am here to you to curate a trip for you and your friends and family.