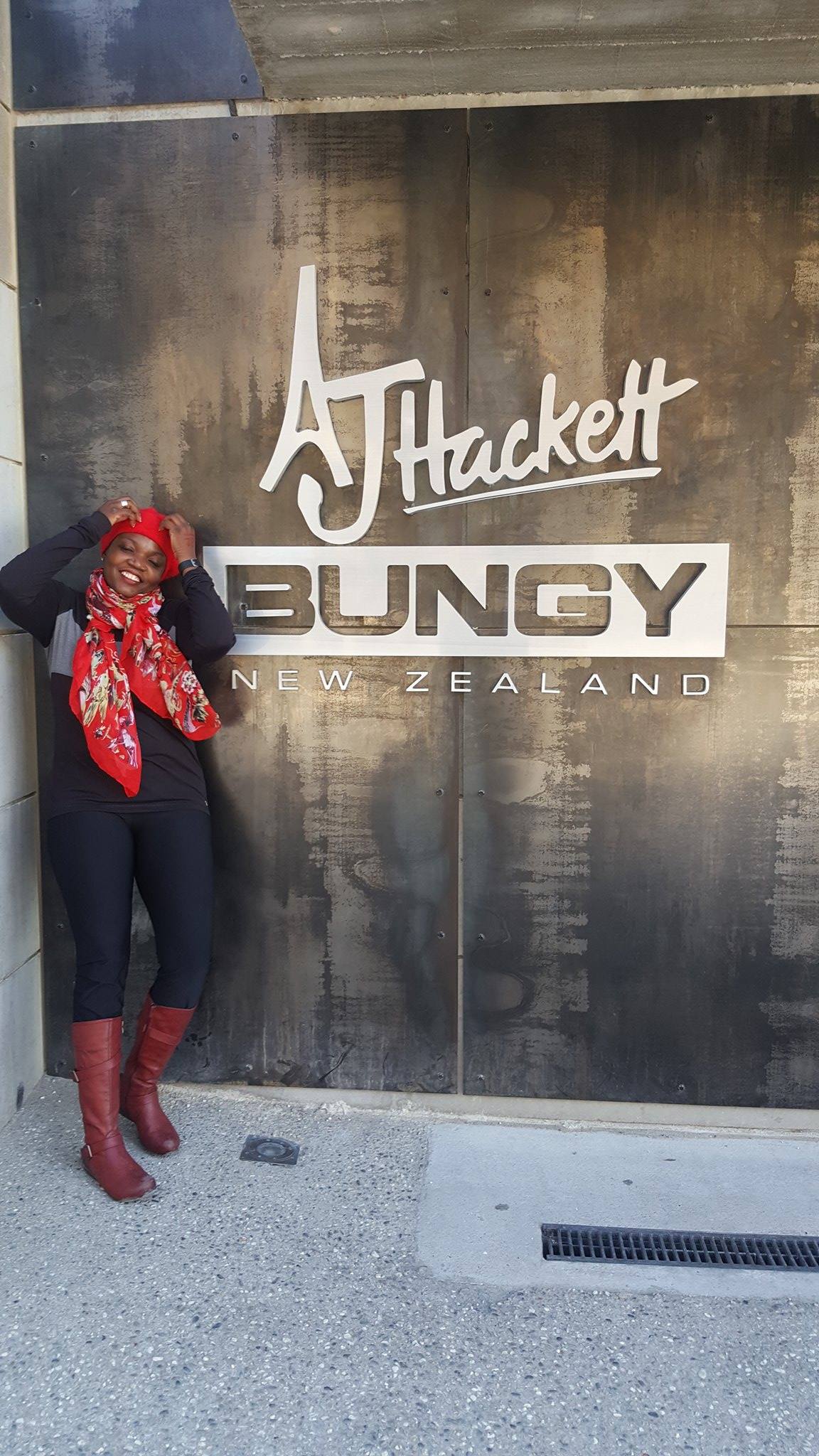 When I arrived in New Zealand about two weeks ago, my co-worker (Andrea) said “you are going to bungy jump when we visit Queenstown for the weekend”.  I was like uh.   I was thinking of skydiving or zip-lining.  Bungy jumping never crossed my mind.

As the week progressed, my client started to encourage me with statements like “You can do it”, “It is so much fun”.   I looked at them and said have you done it?  I got a resounding NO!

Well Friday arrived and the client said as we were leaving for the weekend — we want videos, pictures and a recap.   Mind you I hadn’t made up my mind that I was actually going to bungy jump at that stage.  An extreme sport activity was in the plans but not a bungy jump.

What I didn’t know was that the famous original AJ Hackett Bungy Jump station is on the same route to  Queenstown.  Andrea said lets stop and see what  your in for and watch whoever is jumping.  I was like okay.   We went inside and walked around and saw a couple bungy jumps together.   Andrea says since we are here; why not get it over with.  I think I was hoodwinked.  I said I left my wallet in the car and one of the workers said you have to be quick as we are due to close.  Andrea said I will go get it and you go book.  Yes, I was bamboozled.

With a little hesitation, I went to the counter.  The agent explained the process and the cost.  She then told me to get on the scales.  I was like uh!  The scales were in kilograms and she said since I am from the States I wouldn’t be able to convert that quickly.  I thought ok probably best I don’t know the conversion anyway right!  That made me laugh.   Andrea showed up with my wallet in hand.  The agent had to state very clearly that the bungy jump was non-transferable and non-refundable.

As I was walking down the plank (oops, I meant bridge), one of the crew members approached me and started to prepare me for the biggest adventure of my life.

Setup Process Prior to Bungy Jump

There are a number of safety and setup processes prior to any jump:

The last step was the beginning of my fear

As I was approaching the ledge and looked down, I started to say “Black people don’t jump”.  I was trying to find humor to alleviate my fear.  However, it was not working. 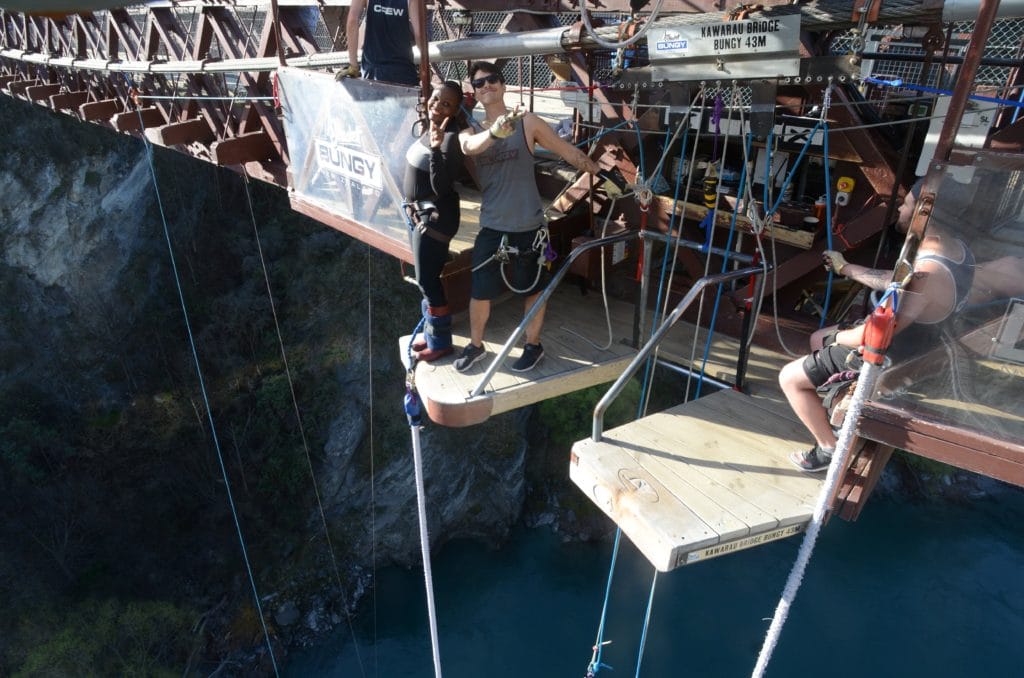 The crew gave me instructions to raise my arms up and jump.  Instead one hand grabbed the railing and the other almost his private parts.  For about a minute, the crew was giving me encouraging words and what to focus on to help me jump.  The only thing that was going through my head was I going to die of cardiac arrest.  I wasn’t afraid of injuring myself but rather the shock and/or fear would cause a massive heart attack.

Finally, two crew members grabbed an arm each and held straight upright and then gently  pushed me.  Note they are not actually allowed to push you so I told them the only way would be via a helping nudge.  Once I opened my eyes,  I started to laugh…a very happy exhilarating laugh. 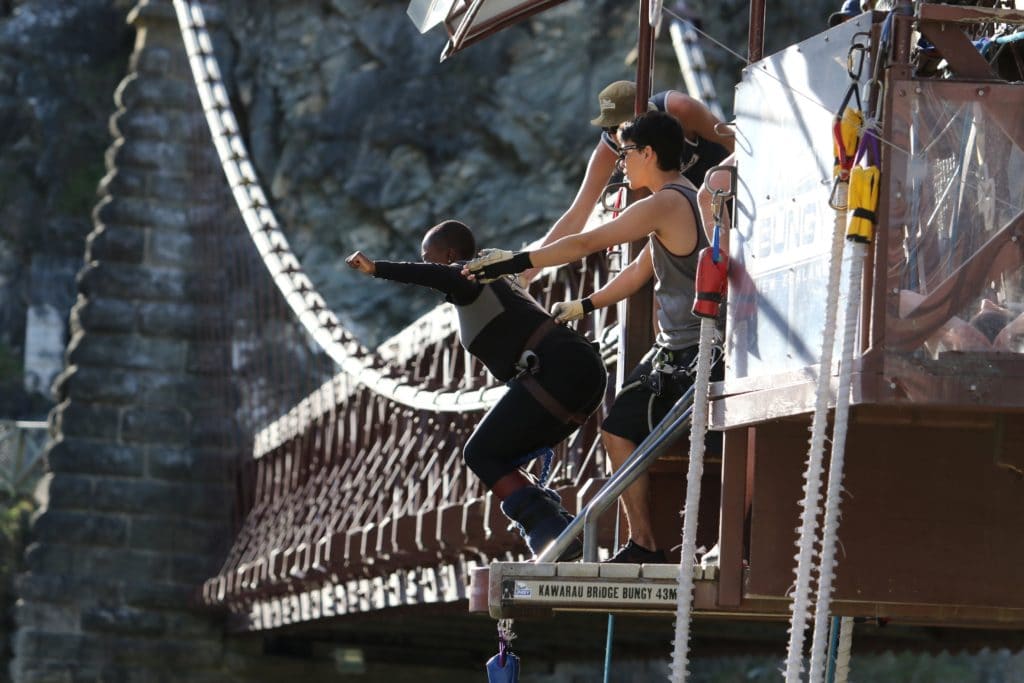 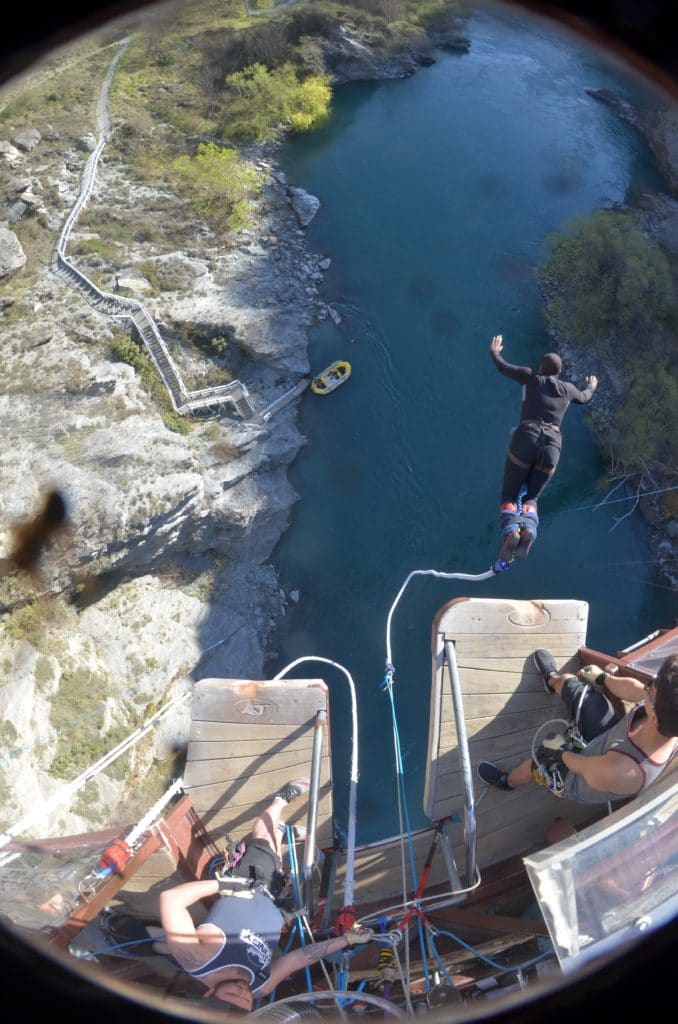 I bungy jumped.  What a feeling!  I loved it.  There was no fear just a thrill.  The jerking and swinging was about 30 seconds, then 30 seconds of hanging until I was pulled into the raft. 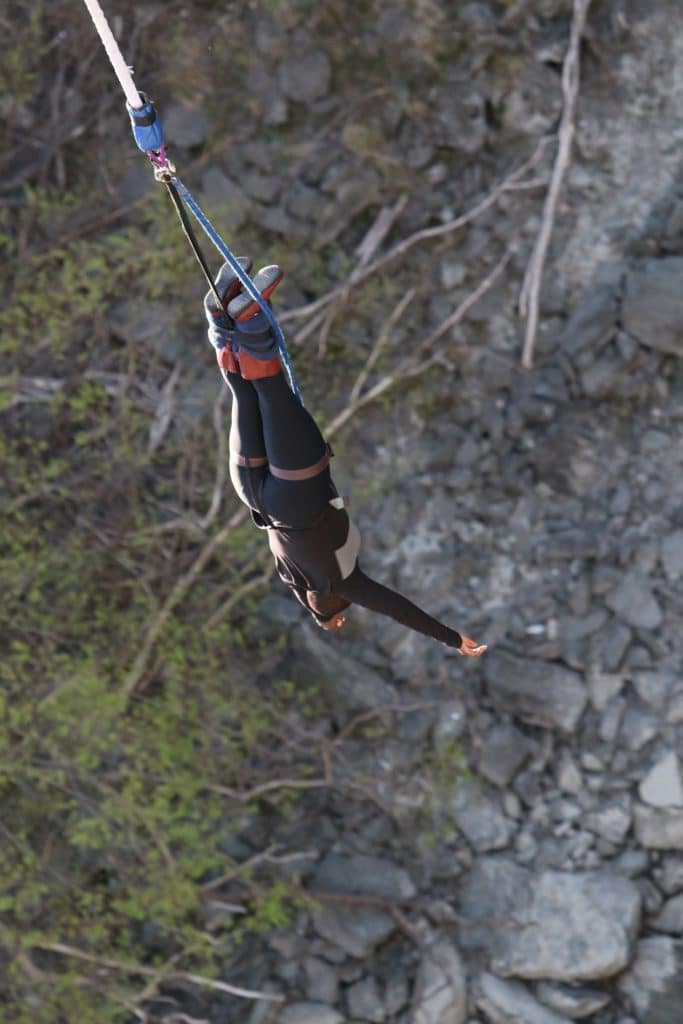 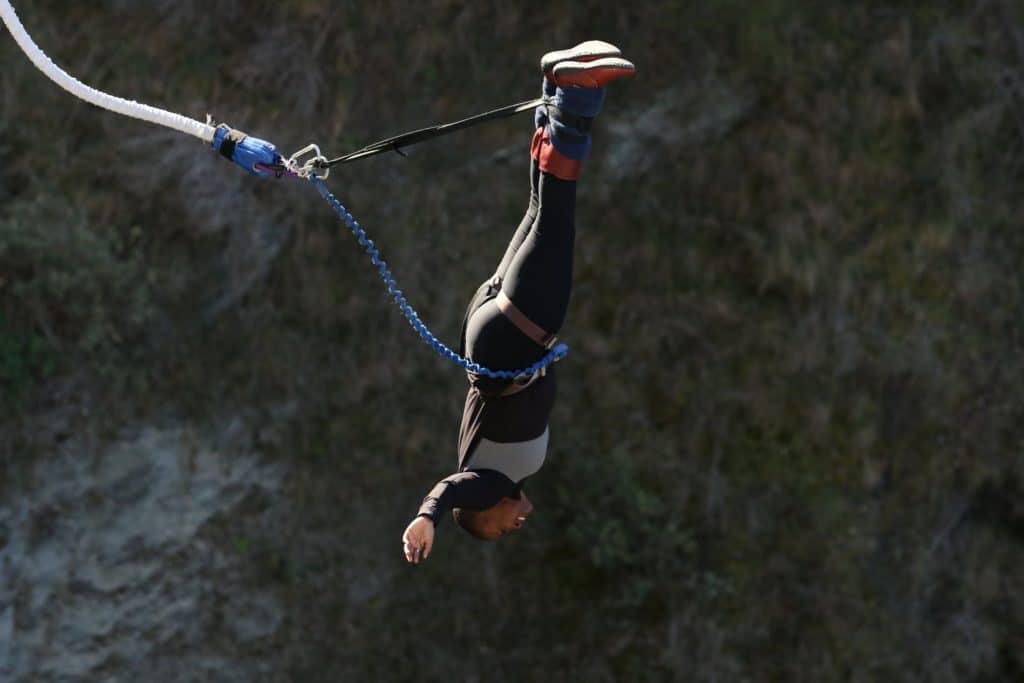 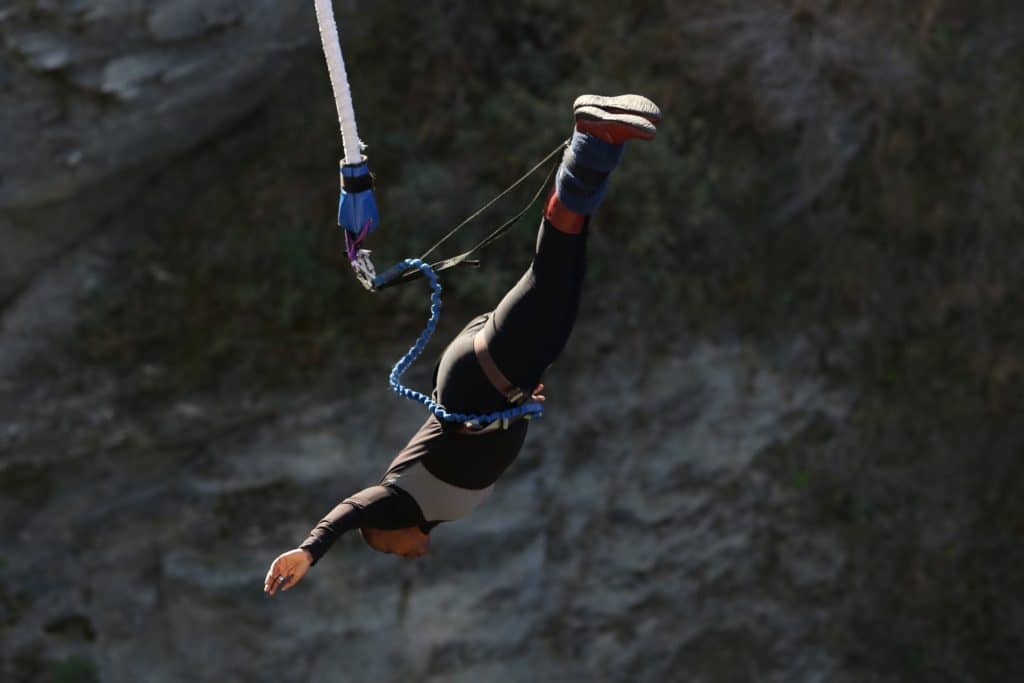 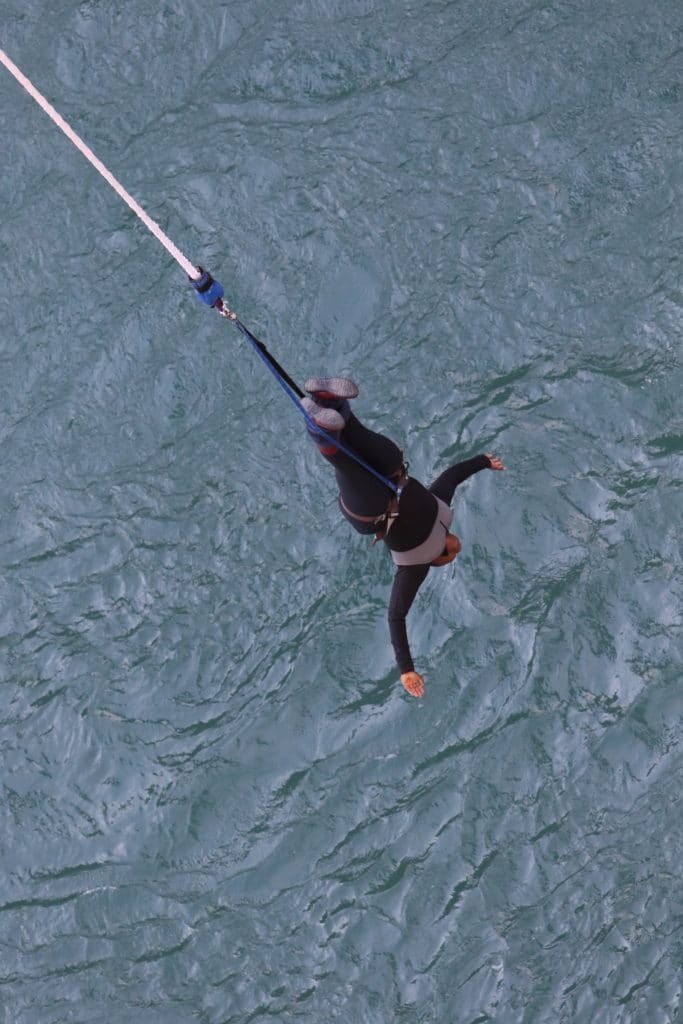 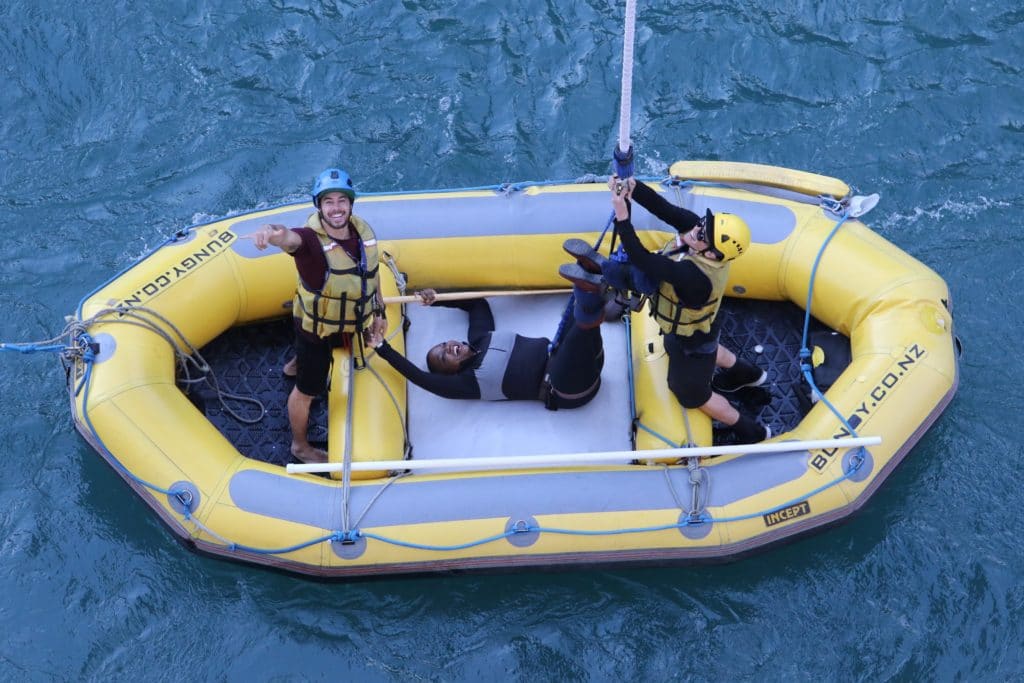 Here is the unedited video of the entire jump.  I hope you enjoy it this experience with me.