Peak Island, A Weekend in Portland ME

I woke up Friday morning and decided that this is the weekend to visit Portland, Maine. Next thing I knew, I booked my flight and hotel for a Saturday to Monday getaway. Then it was time to make the donuts and start packing. Alas, I had to dig my poor carry-on luggage out of storage and the dustiness. The injustice!

The packing was somewhat easy, as the weather in Portland would be in the 50s and 60s…. No cute spring dresses or tank tops, but leggings, jacket, and long sleeve knit tops. Now, the hard part, getting up to make a 6 am flight. In my personal opinion, extremely early flights should be a crime against humanity. The stress and worrying of oversleeping will keep you up all night. Anywho, I made my flight. BTW, why did Delta take me to Detroit before Portland? 😏

The city offers quite a bit for such a small city! Known as “the other Portland” to some, this East Coast Portland does have quite a lot in common with its West Coast cousin, such as their hipster culture, outdoor activities, and dining options. 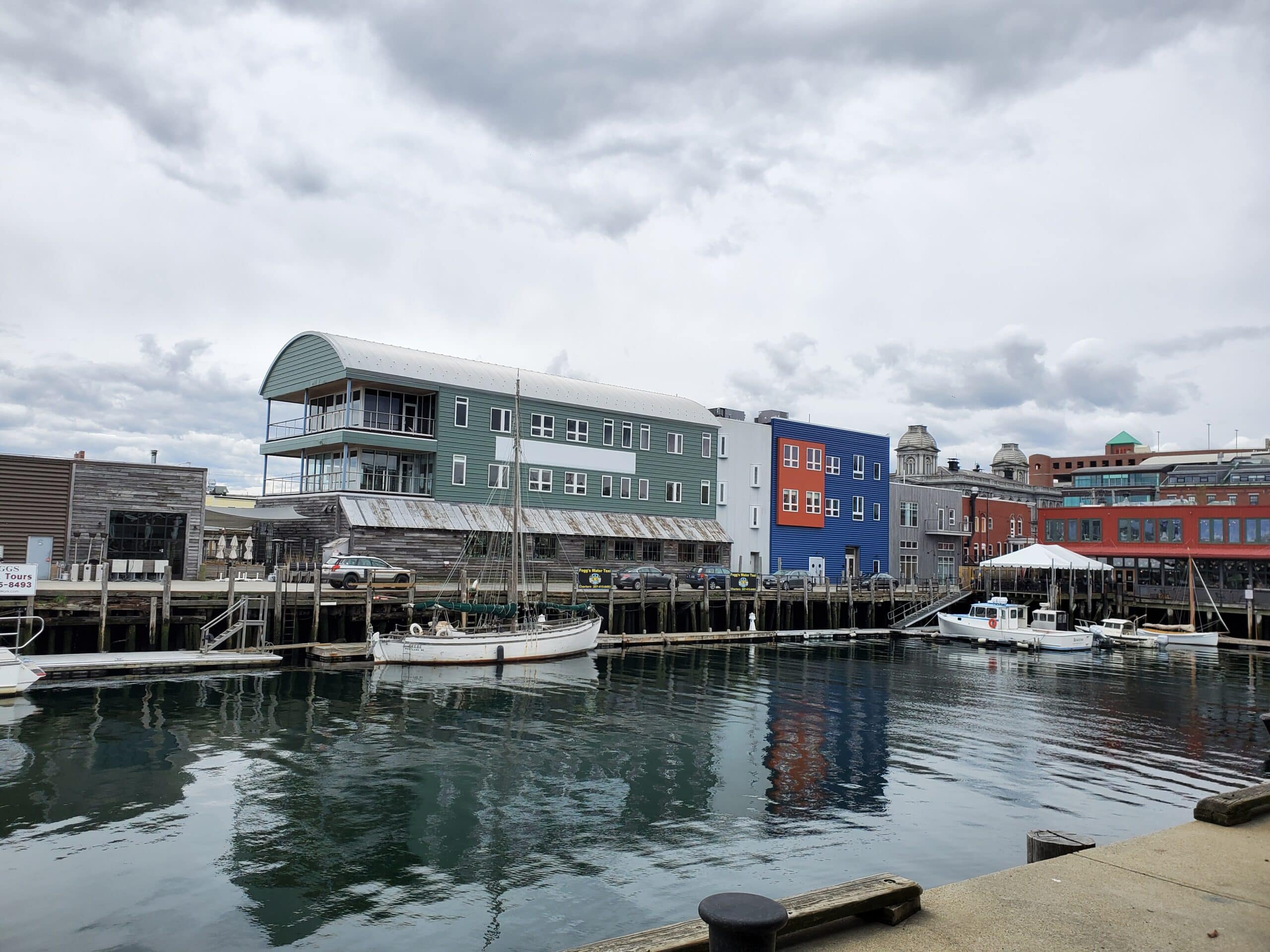 Based on Maine’s southern coast, Portland has a fascinating history over the centuries, including being a primary port for the new United States and also suffering through multiple disasters, such as being burned down three times. The city was built and rebuilt several times. Much of the old port is a monotonous Federalist style of plain brick, but it’s an understandably practical design given the multiple fires that tore through this area over time. 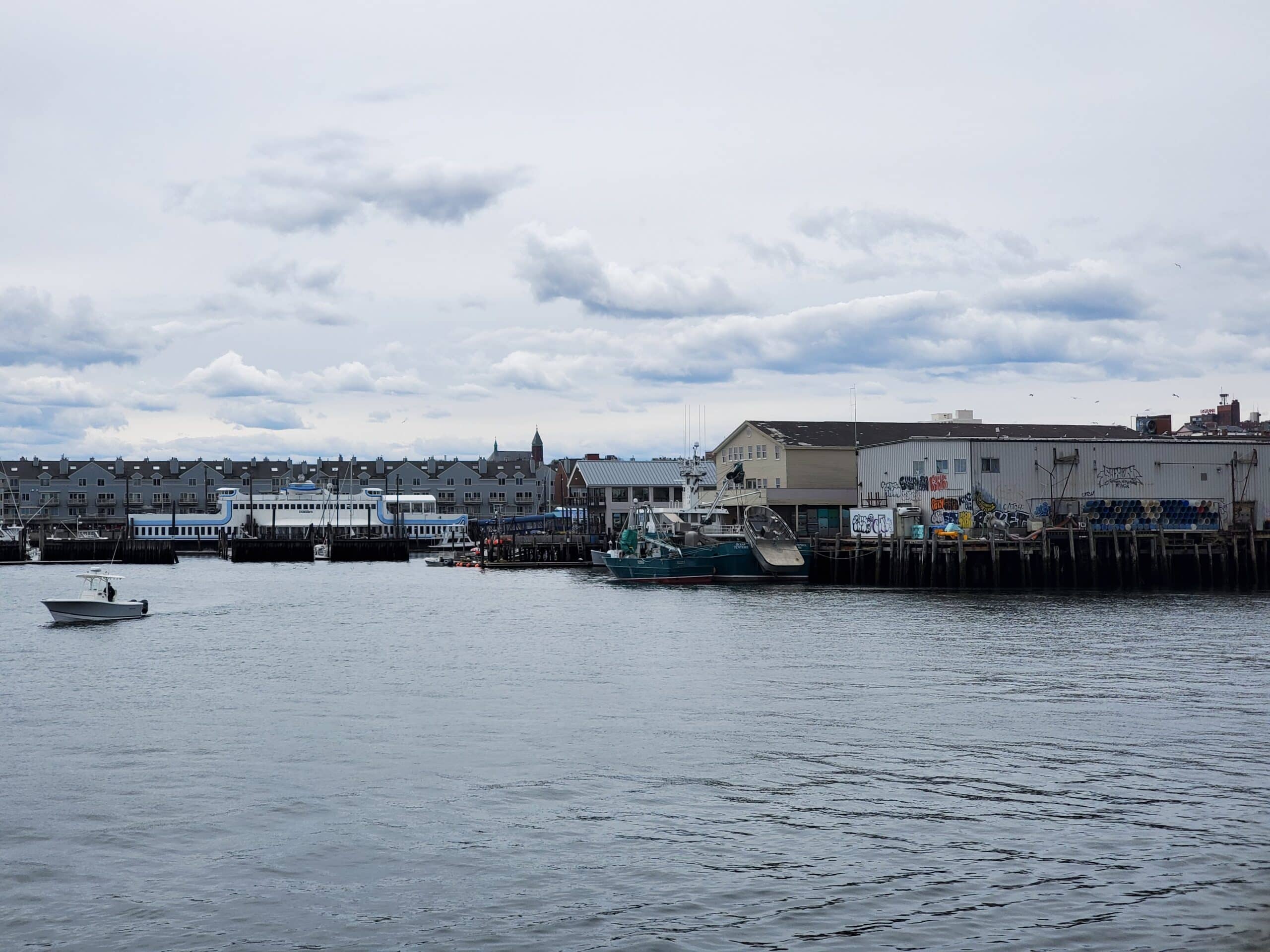 Today’s Portland is thriving, with the beer and food scene leading the way in putting Portland on the map for more and more tourists. It’s also well-known for its coastal views, with iconic Maine lighthouses readily available for your viewing pleasure.

HOW TO GET THERE

PWM (Portland International Jetport) is the main airport, which is about a 15 minutes drive to downtown Portland. An Uber/Lyft or cab ride is just under $20 to downtown.

I stayed at the AC Hotel in downtown Portland. The location is phenomenal —it’s right on the water by the Old Port and was a 15-minute max walk from everything we did— and the staff is incredibly helpful and kind. The friendliness and general hospitality were definitely a theme in Portland!

There are several hotels and Airbnb’s in the vicinity, so there’s something for every budget! Due to the pandemic, things are coming back. Maine just lifted their restrictions, and so pricing is going to higher than normal.

THINGS TO DO – PEAKS ISLAND

There are a lot of blogs on what to see and do during a weekend in Portland. I opted to do something different and adventurous. I know a shocker! Upon my arrival and half-day excursion, I took a ferry to Peaks Island, one of the Casco Bay Islands. The cost is $7.70 roundtrip, and the ferry runs every hour. There are a total of eight(8) islands along the coastline of Portland.

The ride to Peaks Island from Portland is about 15 minutes. Even though the day was cloudy, the ride was smooth and scenic. 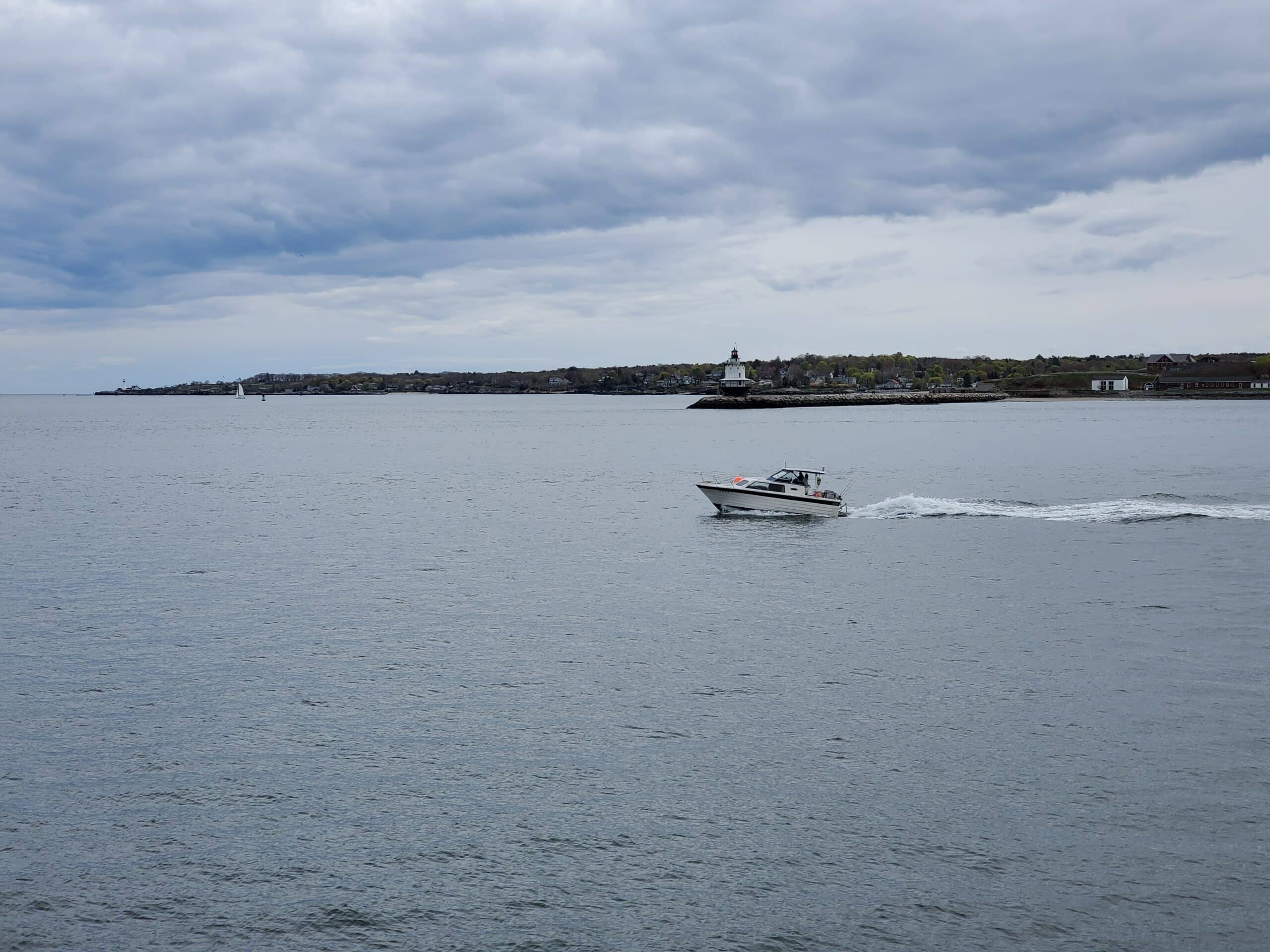 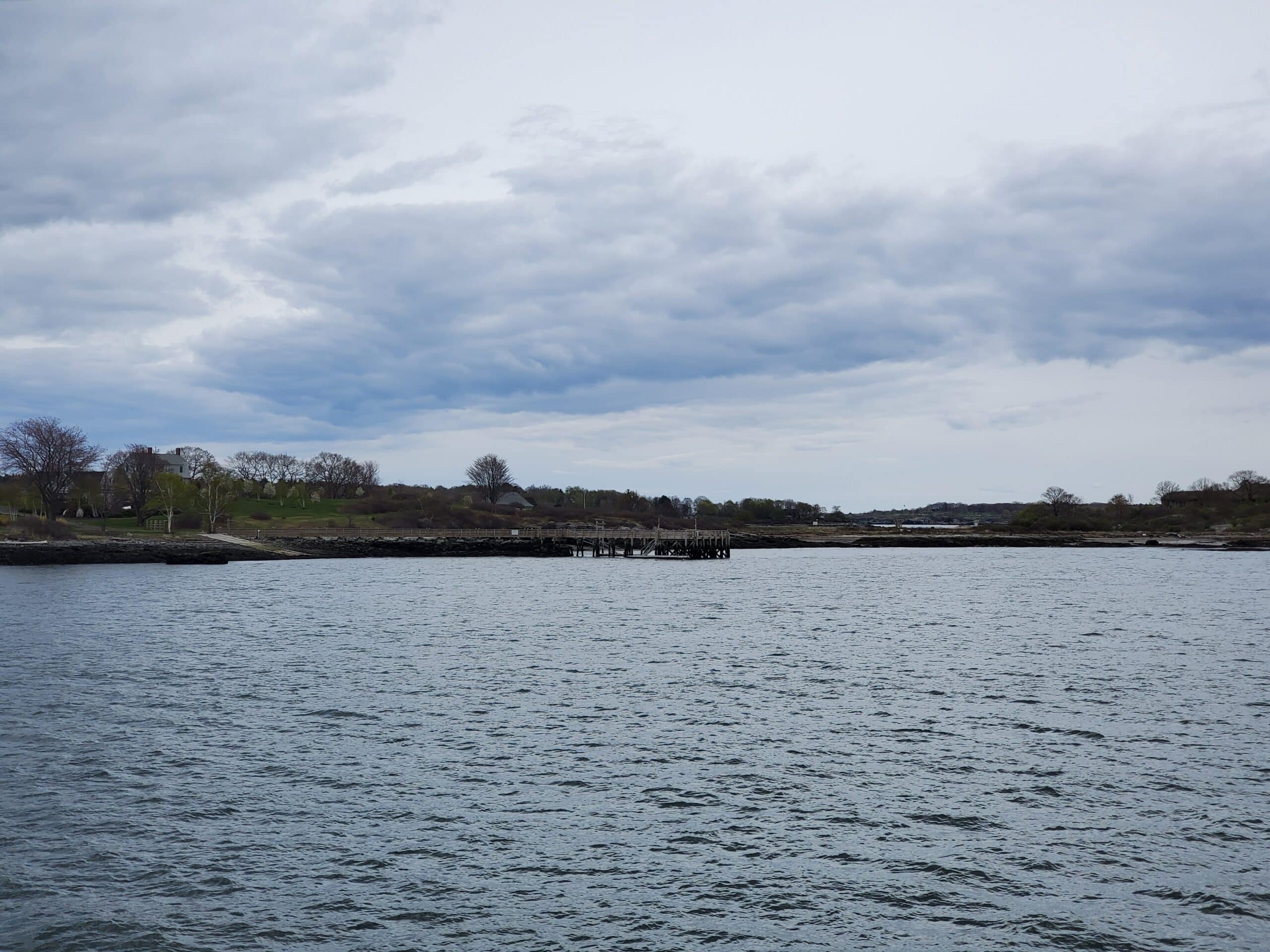 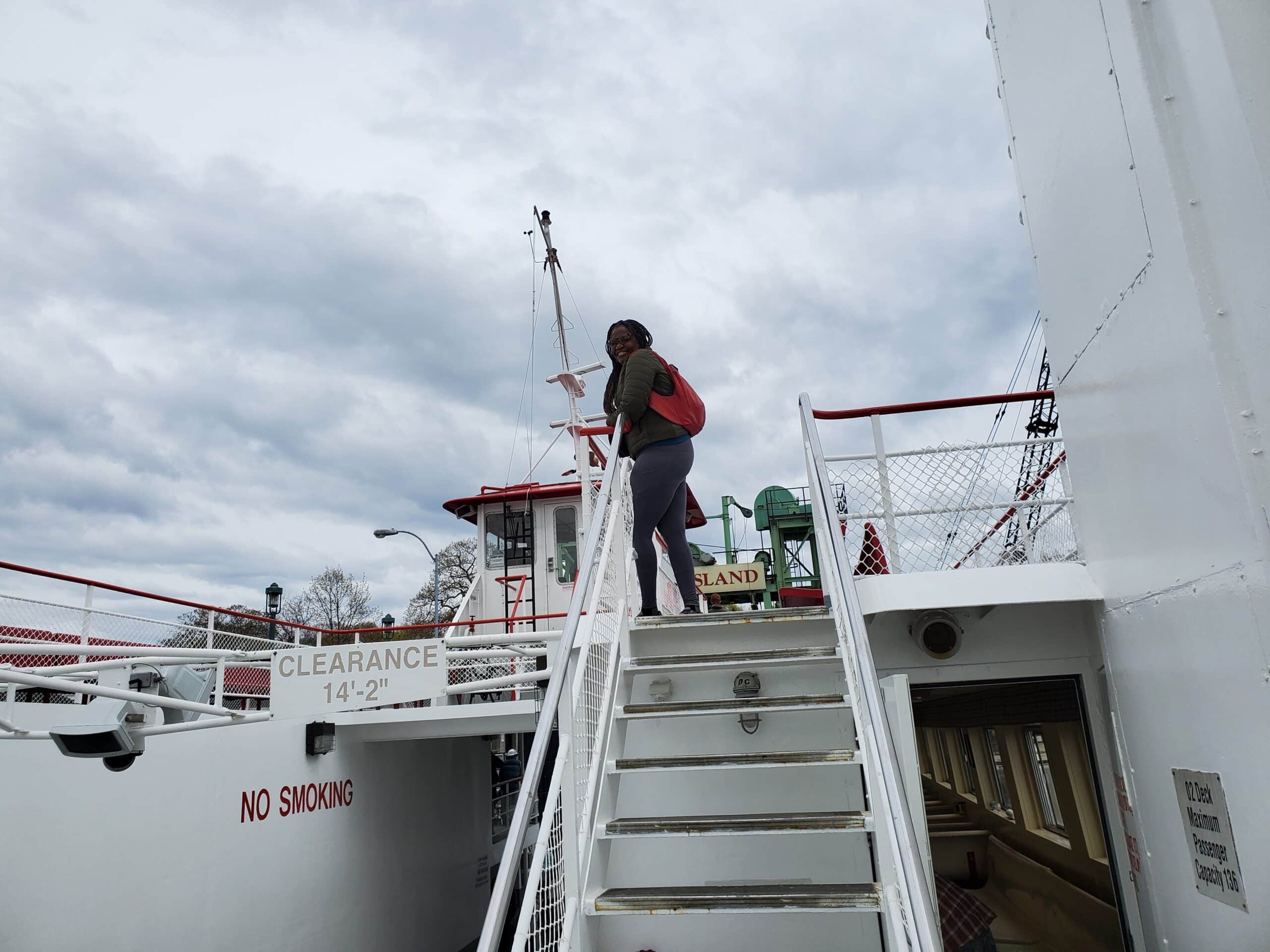 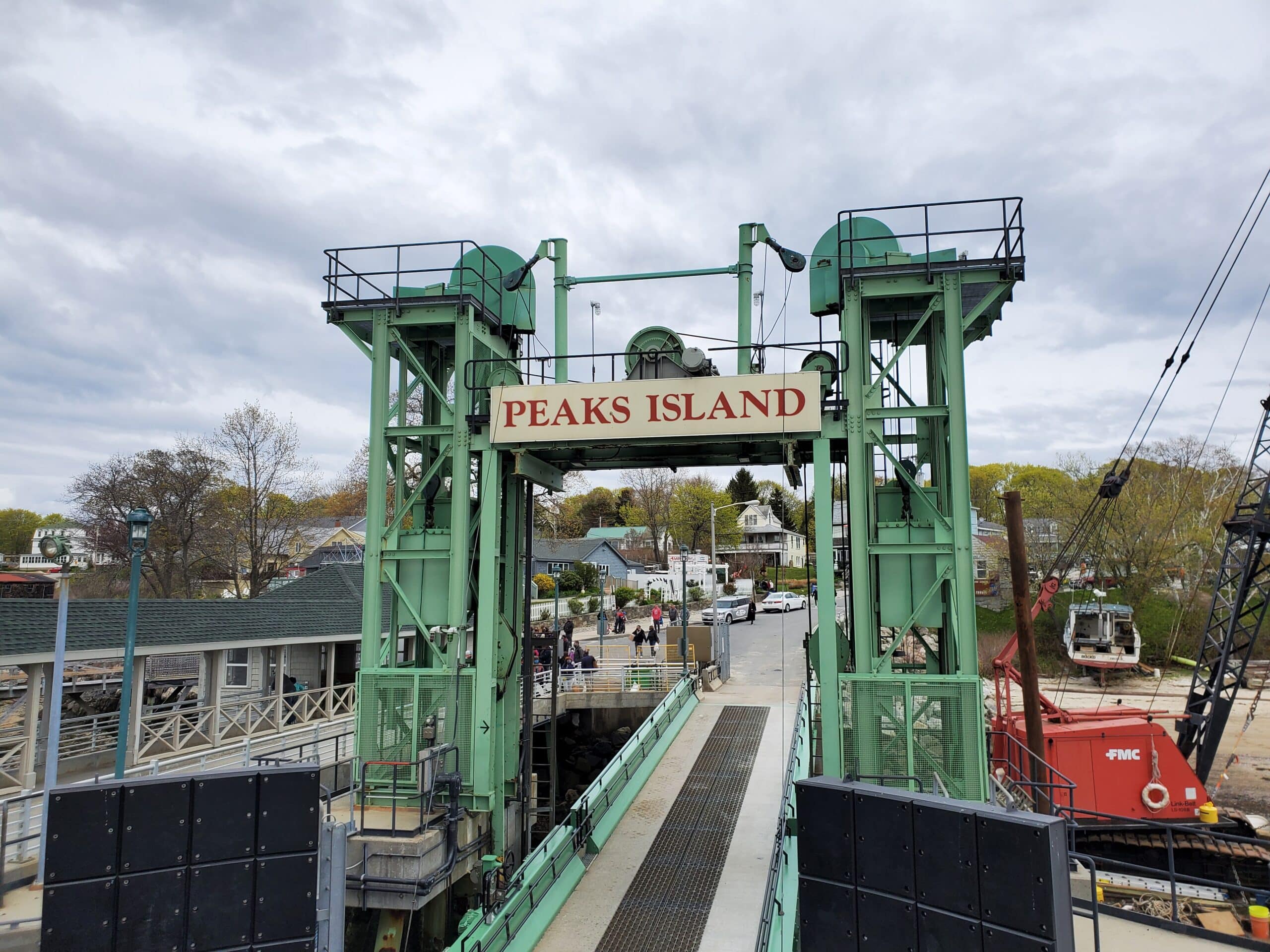 Once on the island, you will see cute and colorful houses. As well as marshlands. Okay, with the marshes, I was expecting an alligator. The Florida in me! I made sure to stay a good distance away lol. 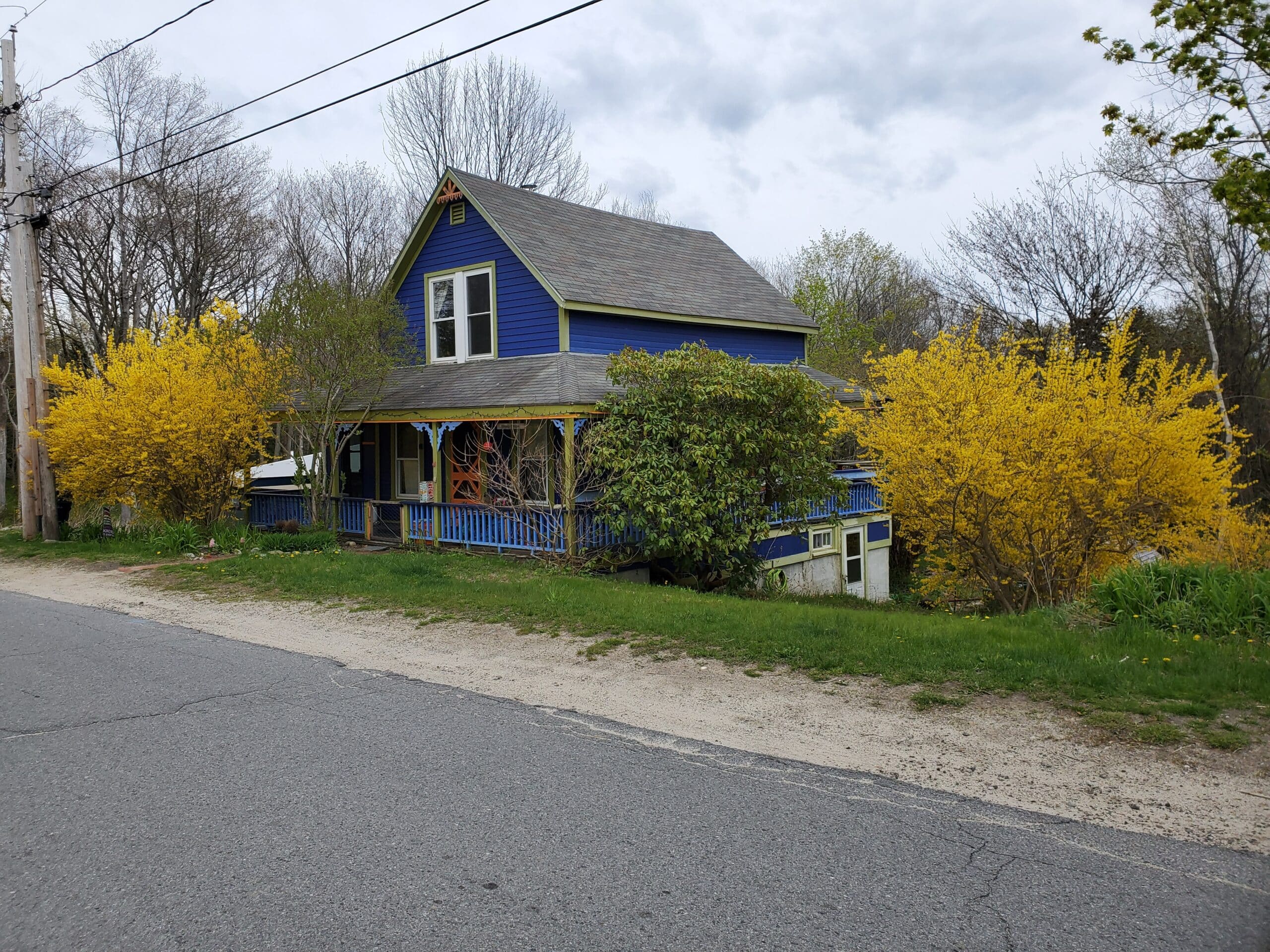 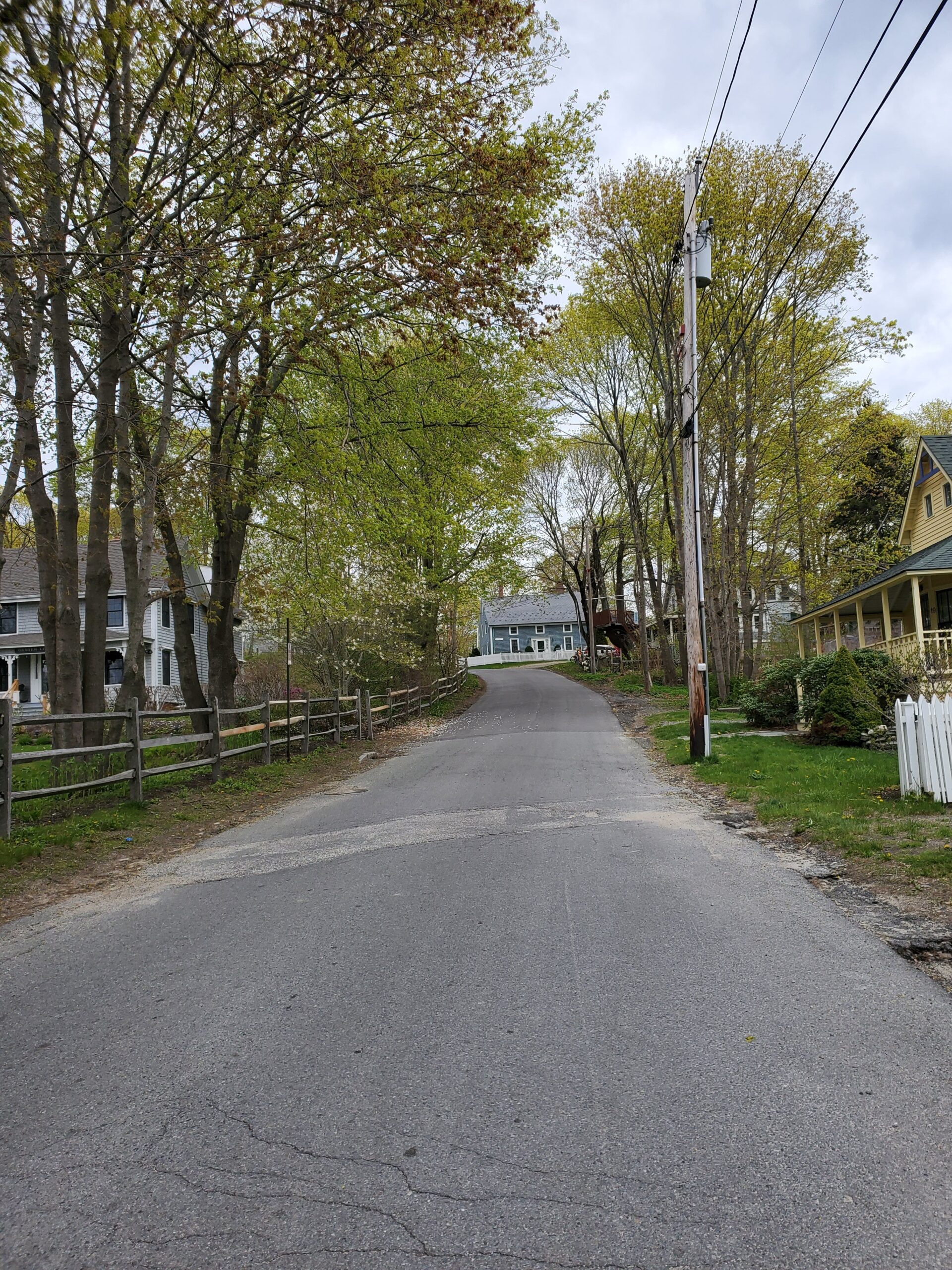 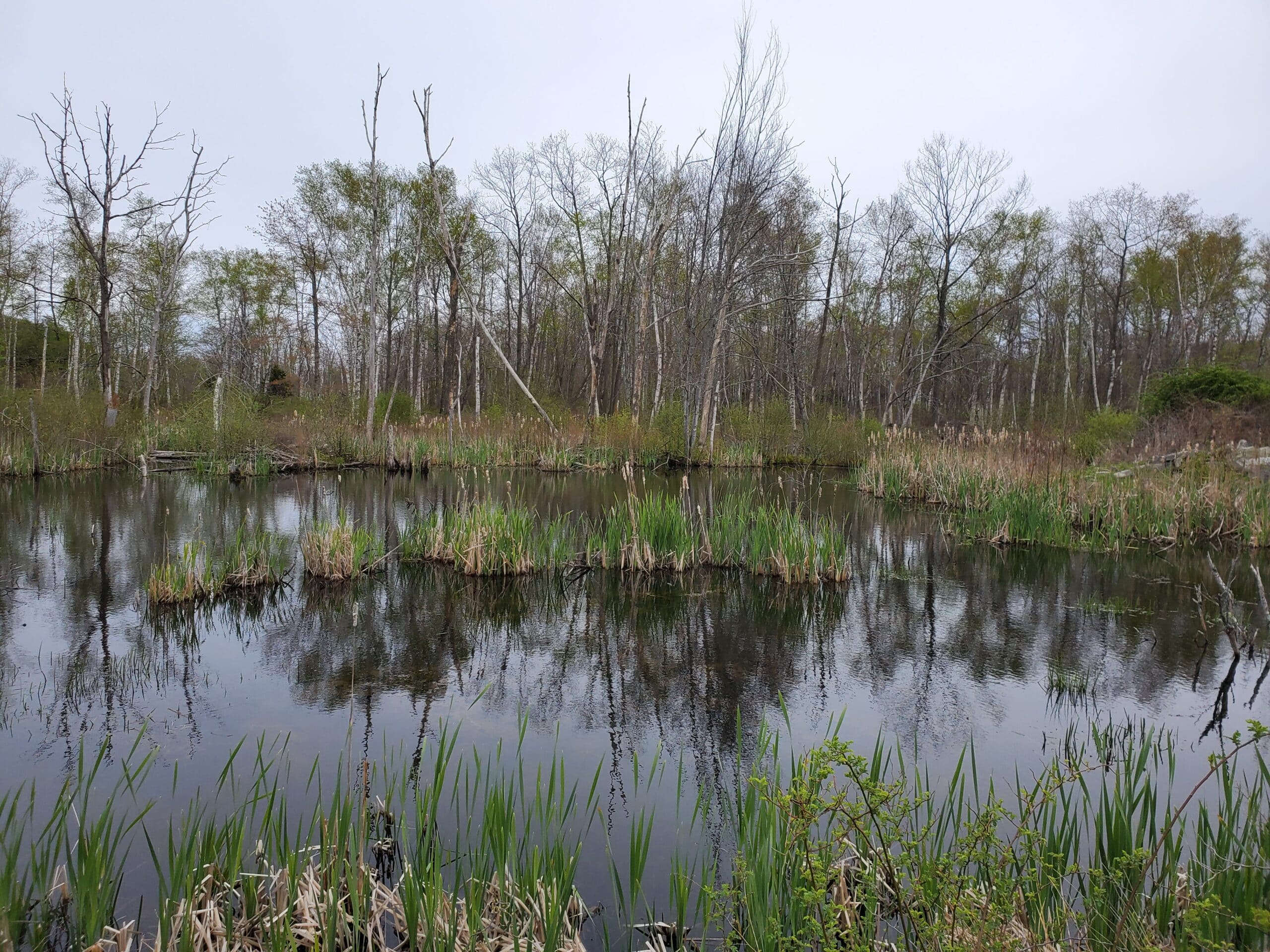 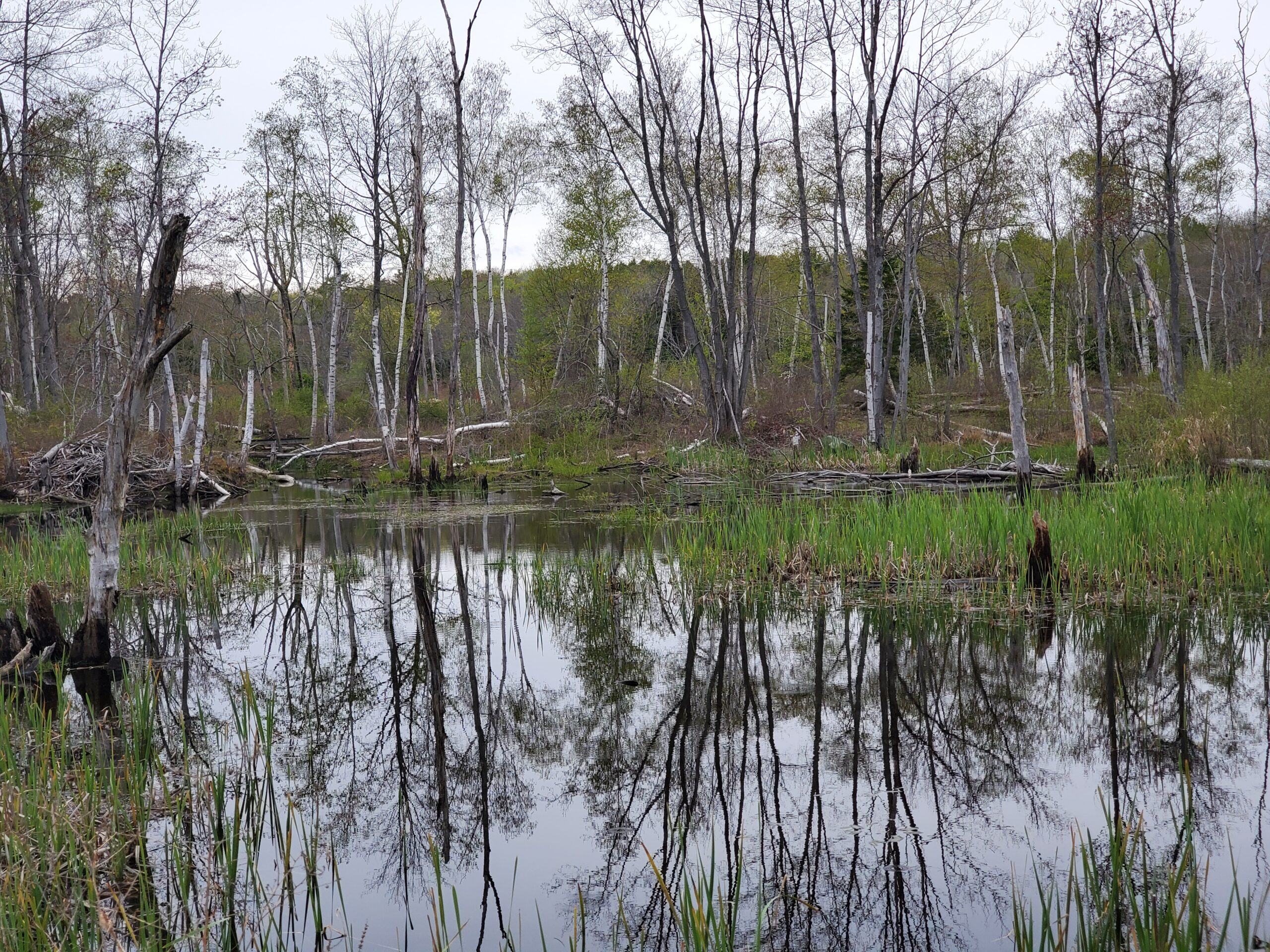 On the ferry ride, I met a mother and son, and we decided to explore the island together. With the help of Google, we decided to check out the abandoned Battery Steele.

THINGS TO DO – THE BATTERY STEELE

The Battery Steele, built in 1942 during World War II to defend Portland Harbor with two 16″ guns, that could shoot a 2240 pound shell up to 30 miles. According to the Peaks Island Land Preserve website, it was one of the largest batteries ever built in the United States. Today, the guns are gone, but many of the structures still remain overgrown and covered in graffiti. It could easily be in a scene of some post-apocalyptic movie.

Note: It is free to roam the Battery Steele, but you will need a flashlight since the battery is deep and dark in many places, as you’ll from the photos. 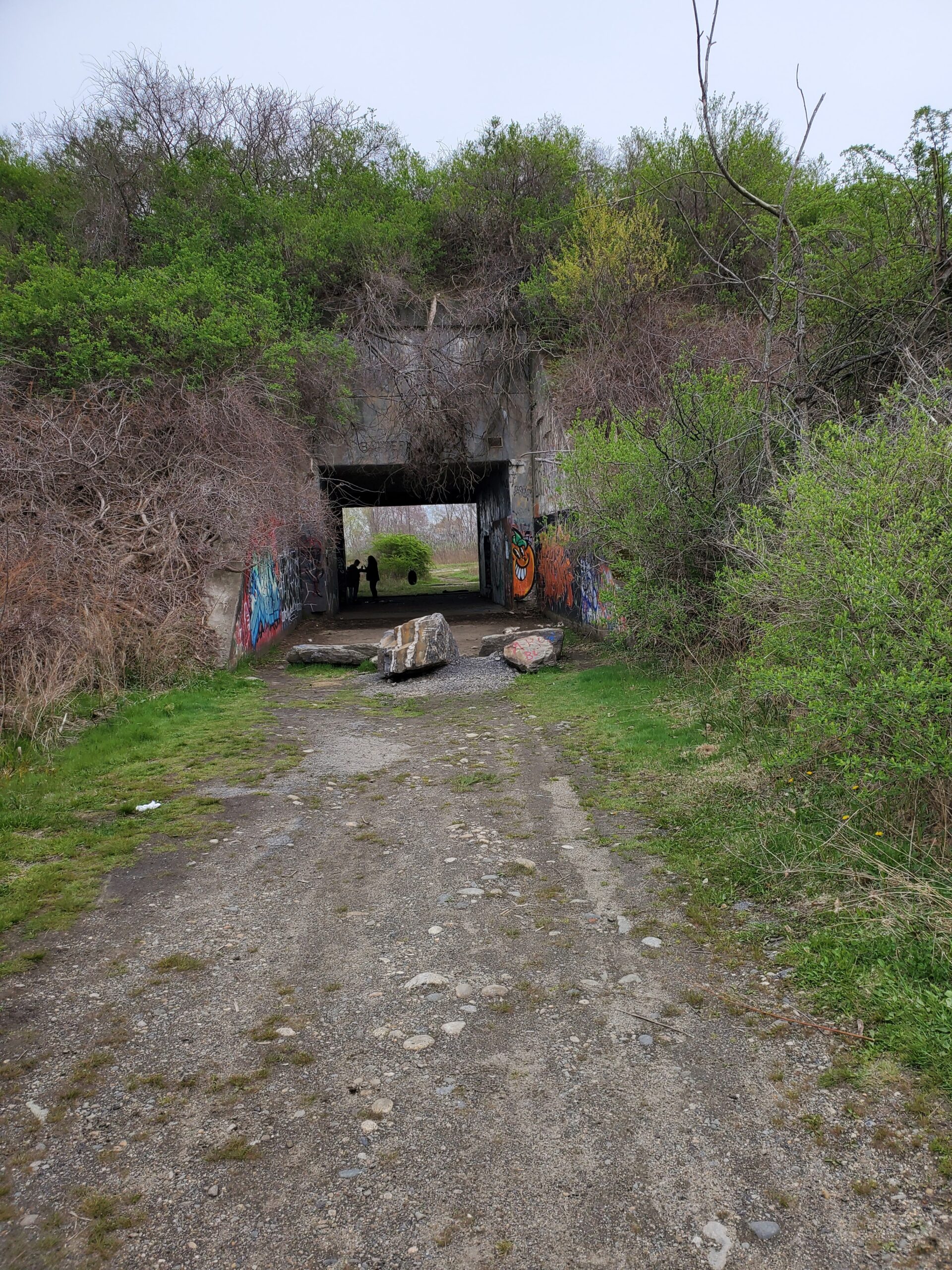 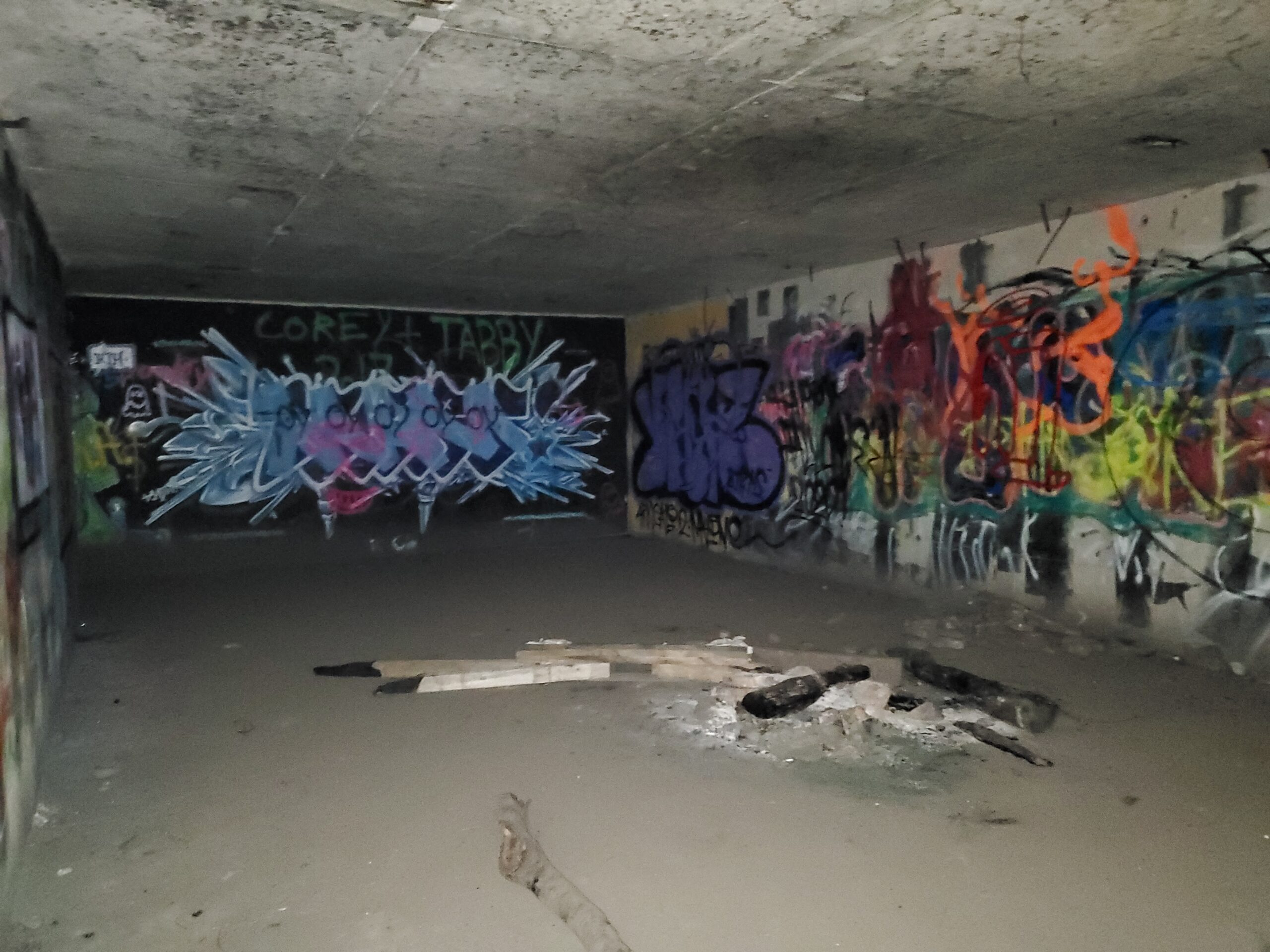 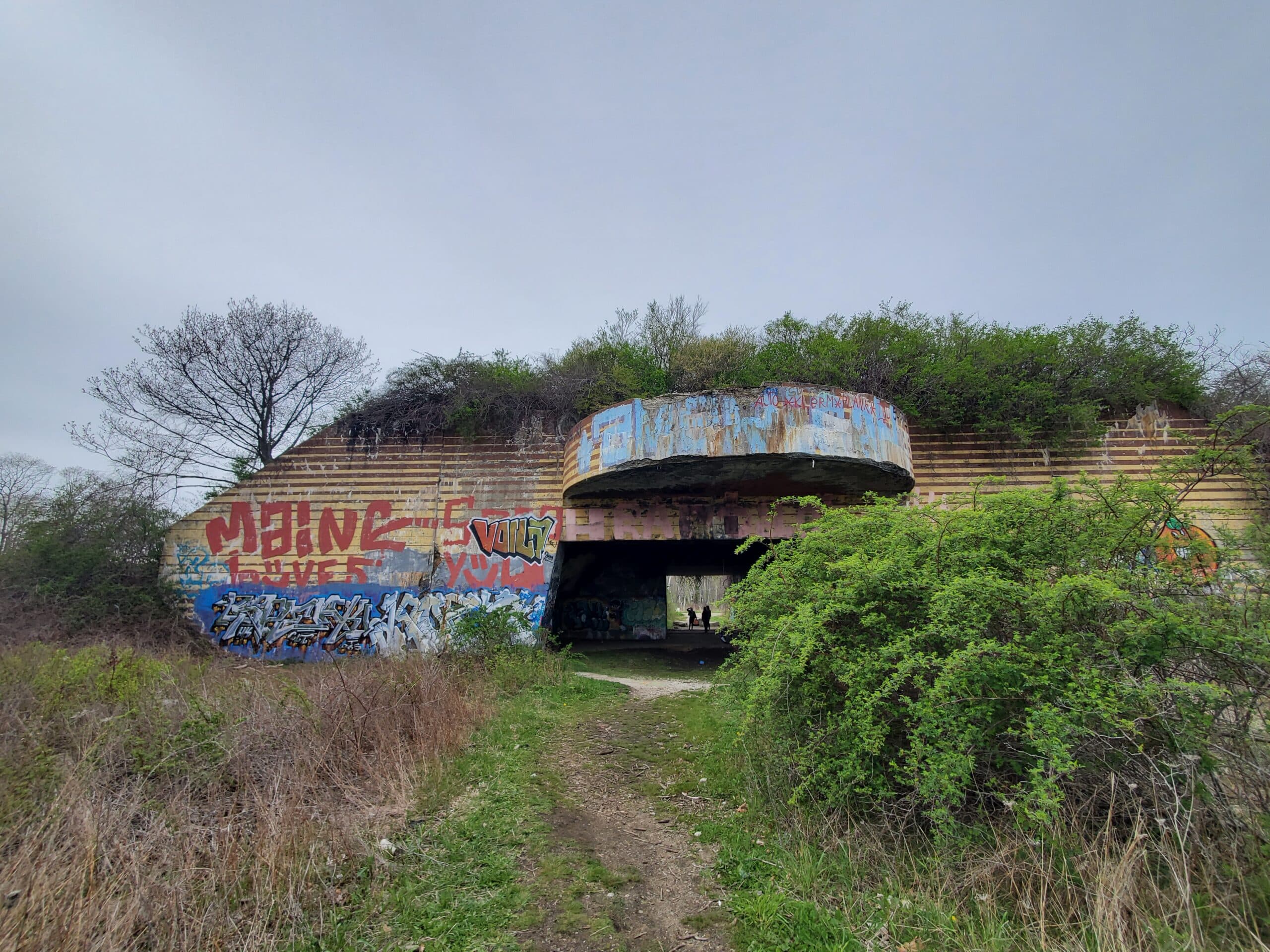 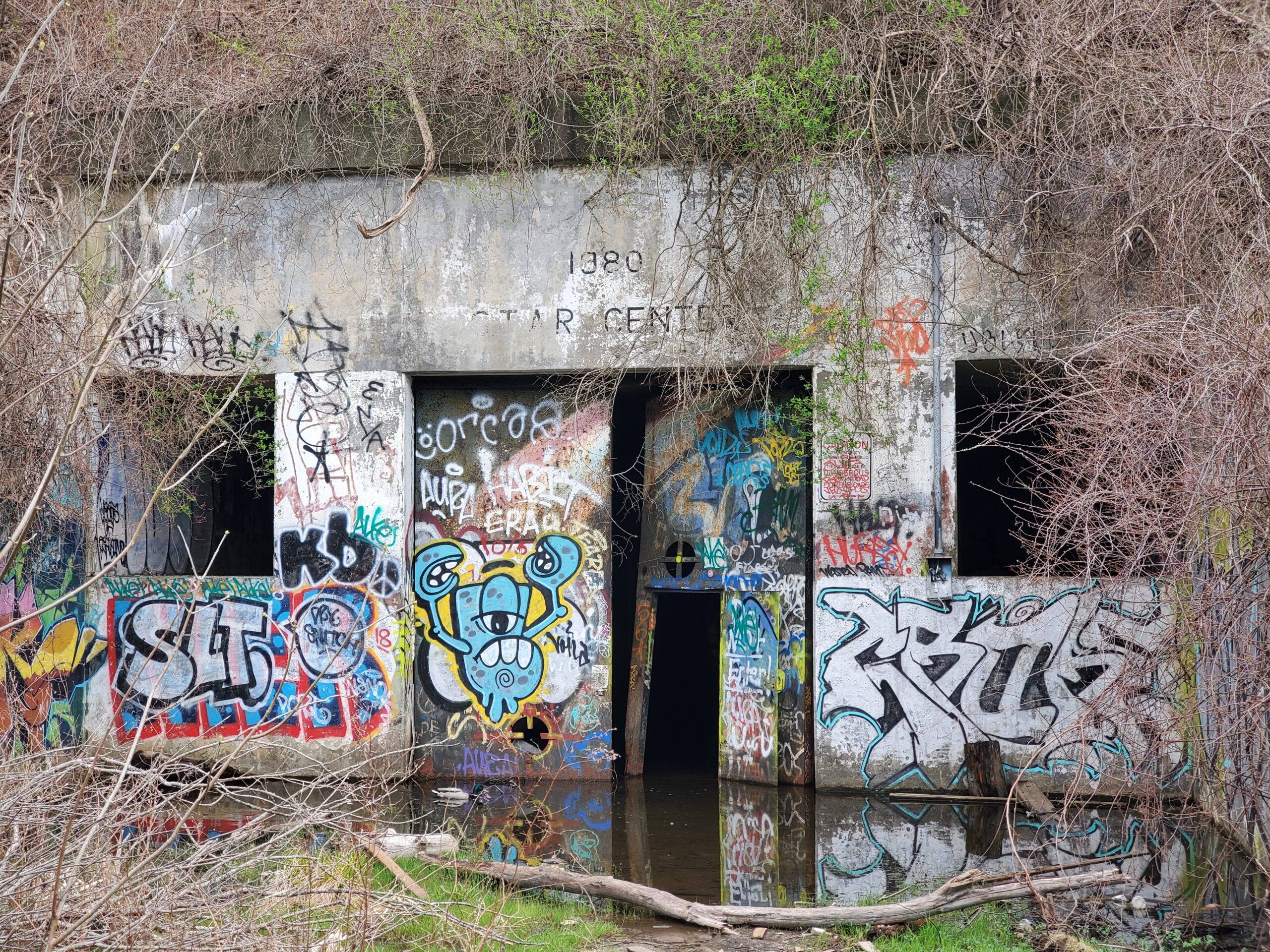 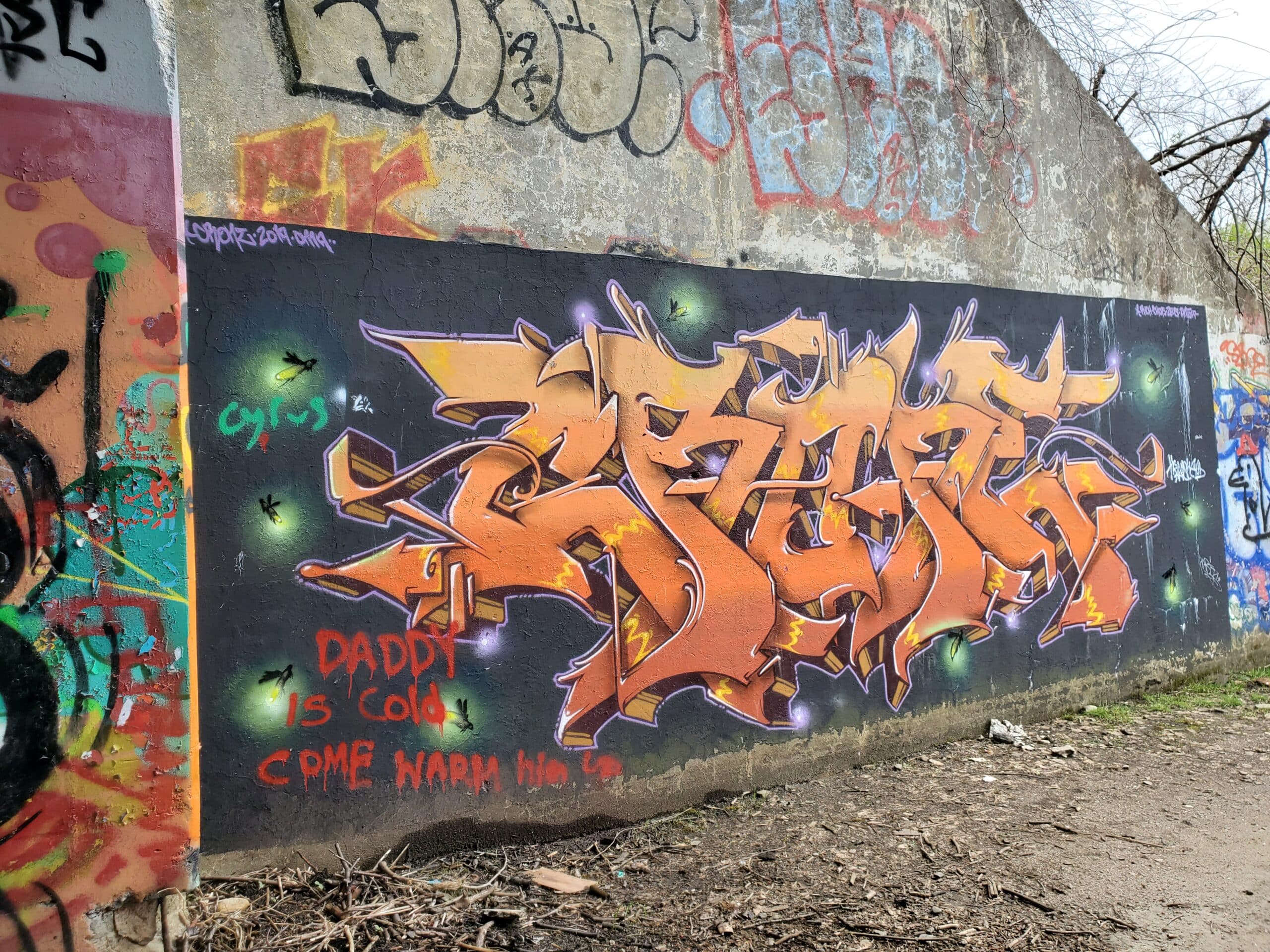 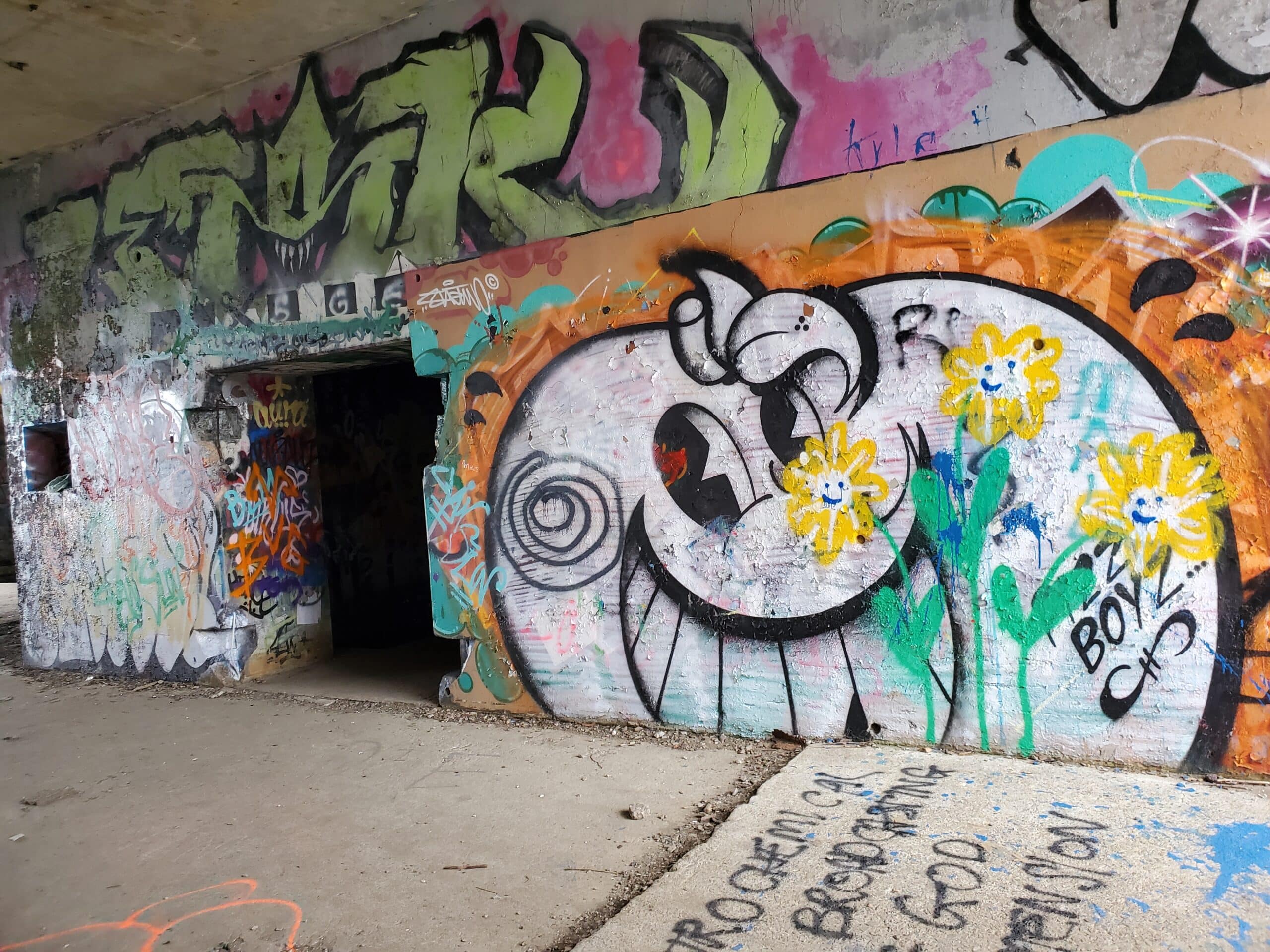 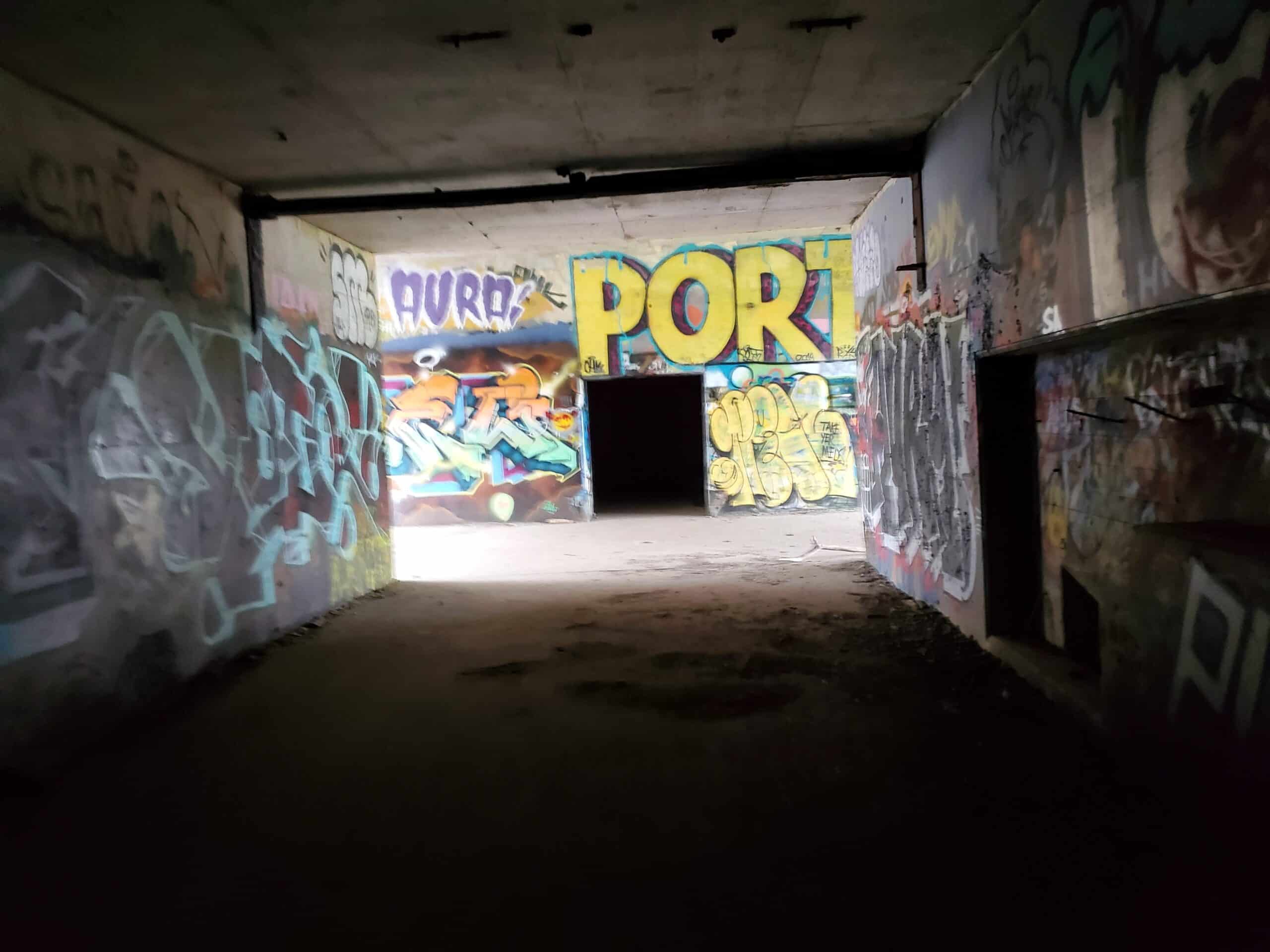 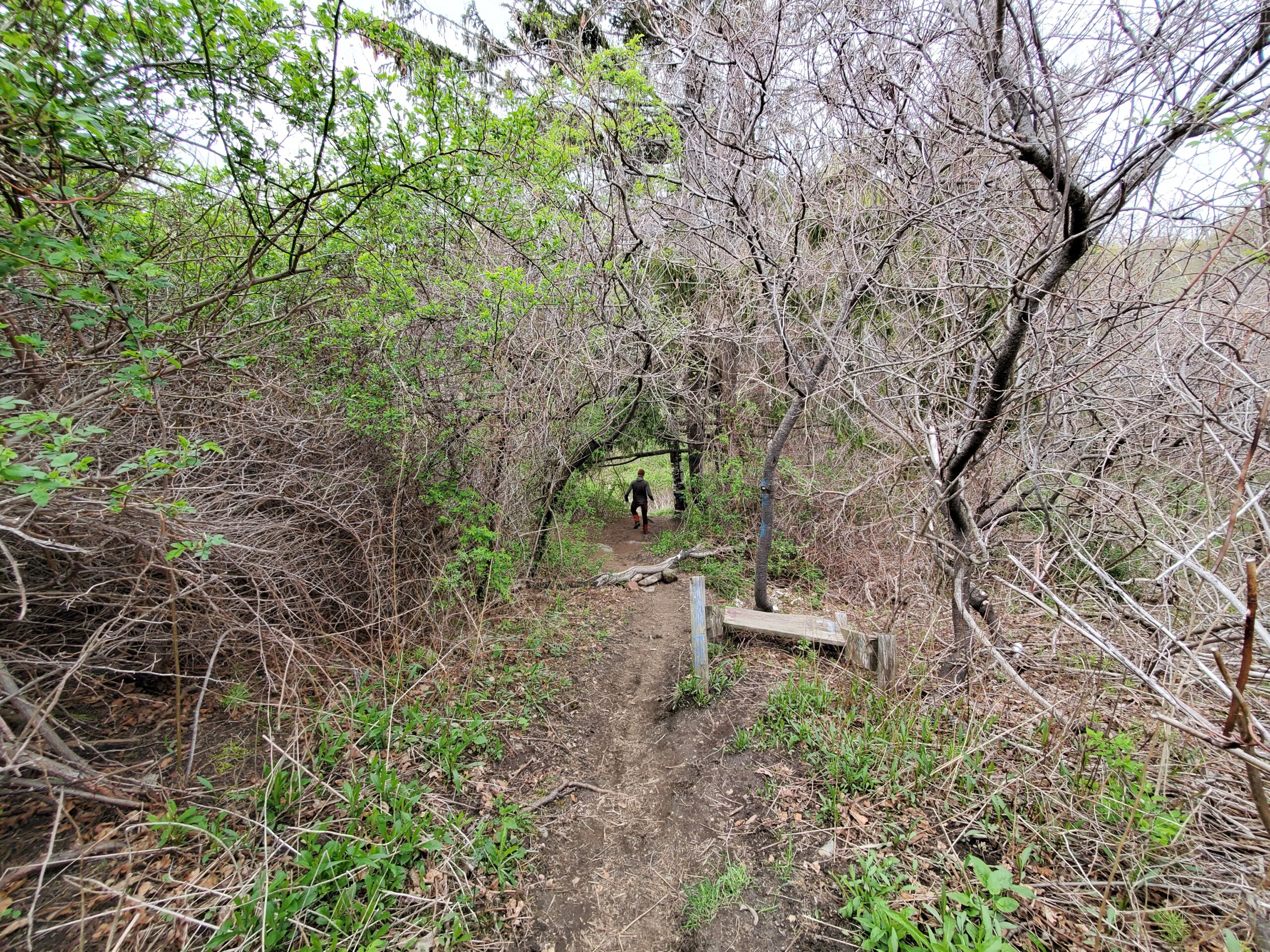 This guy was my exploration buddy. I don’t think I would have done the Battery Steele alone, as it was dark and terrifying. He had me climbing and going through the “woods”. 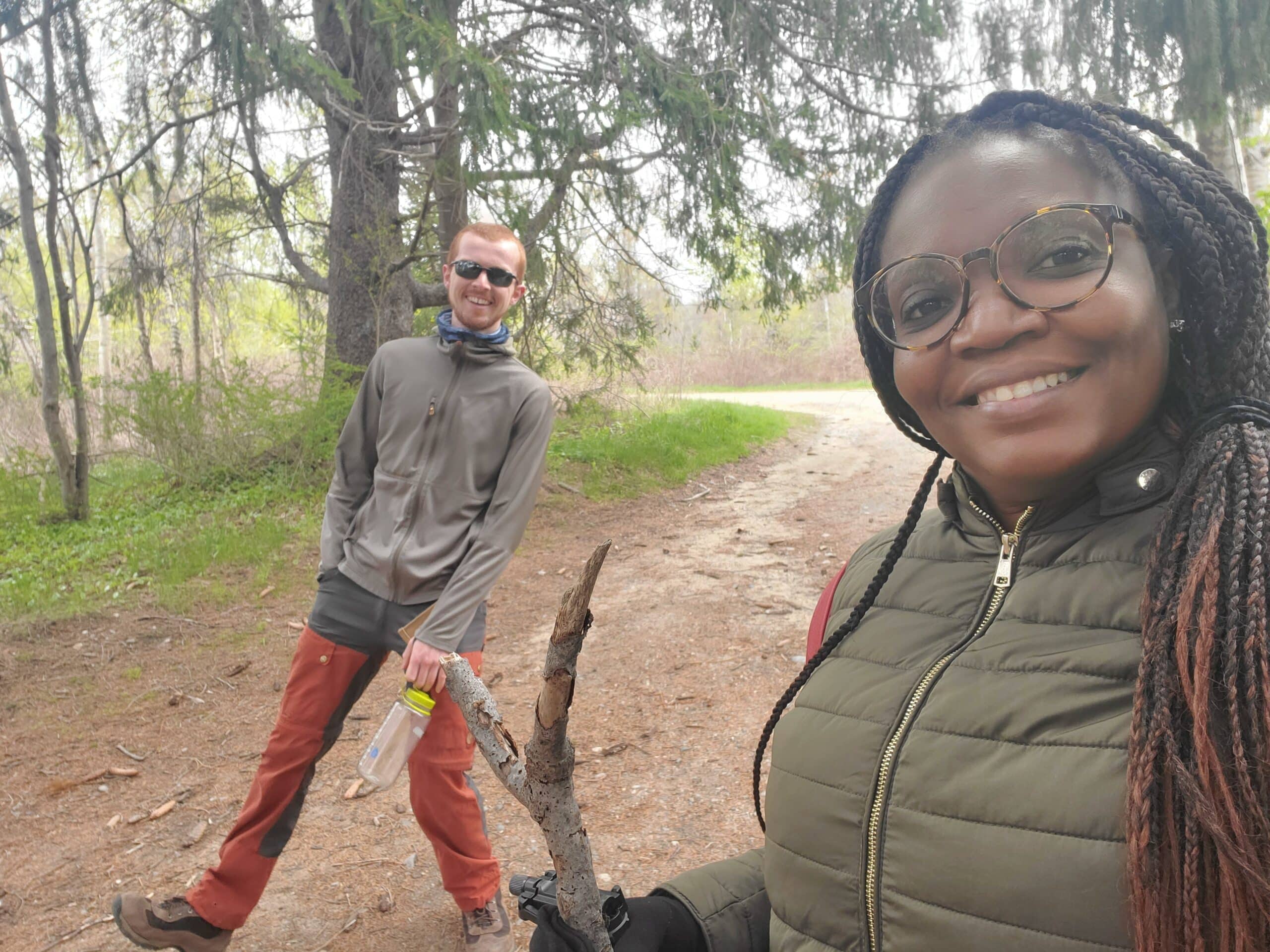 However, with each turn, the views and beauty had me in awe. 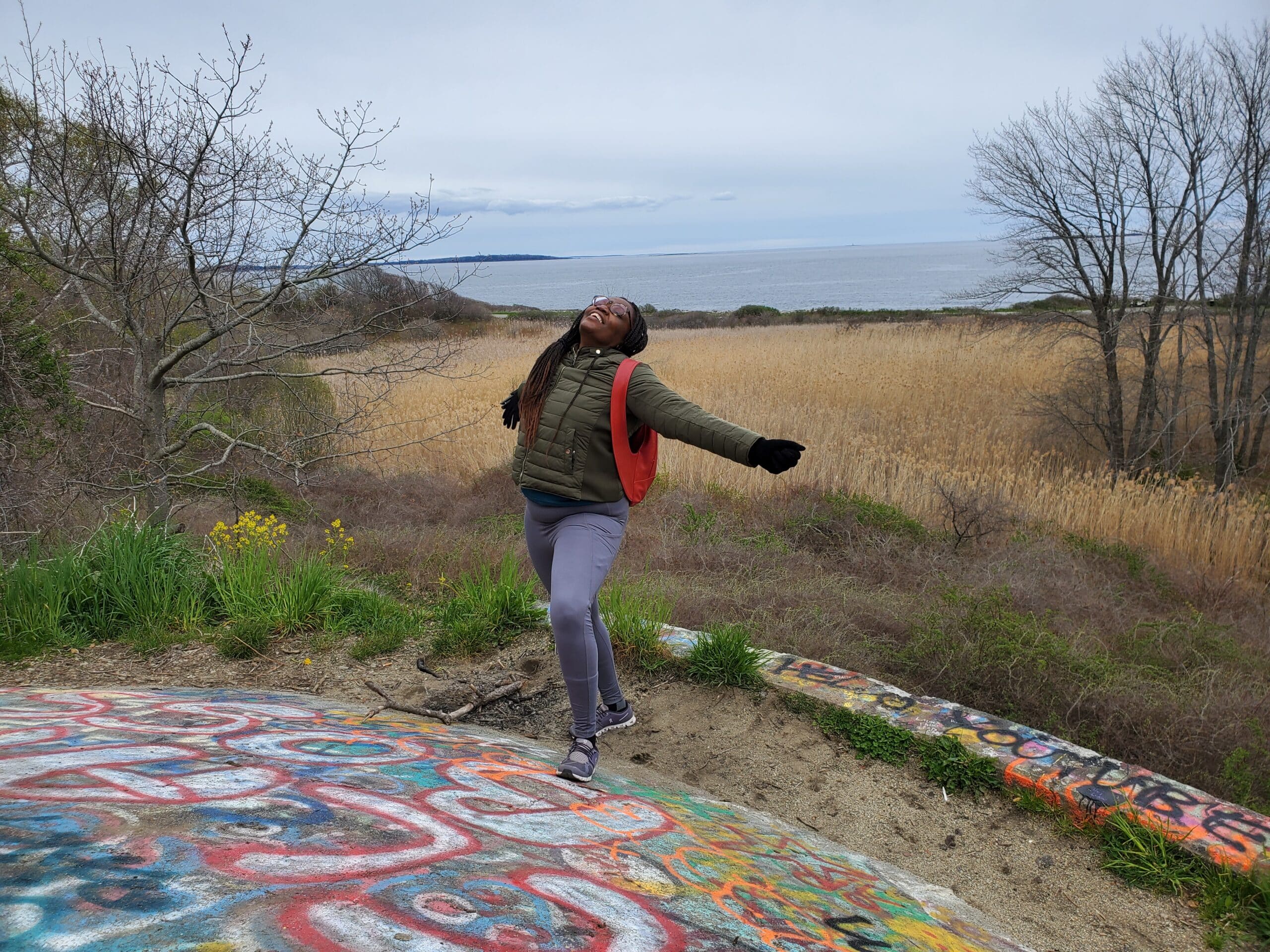 On the island, you do have an option to rent a golf cart to get around, but I opted to walk. You get to see more and get a little bit of cardio. Overall, it was the best several hours of exploration. Peak Island does shut down at 4 pm. I don’t if it is due to the pandemic or seasonal, so if you want to check out the stores and/or get something to eat, do it before you start wandering.

Hope you enjoyed Part 1 of A Weekend in Portland Maine. Part 2 is all about the bike tour to see Portland’s lighthouses. 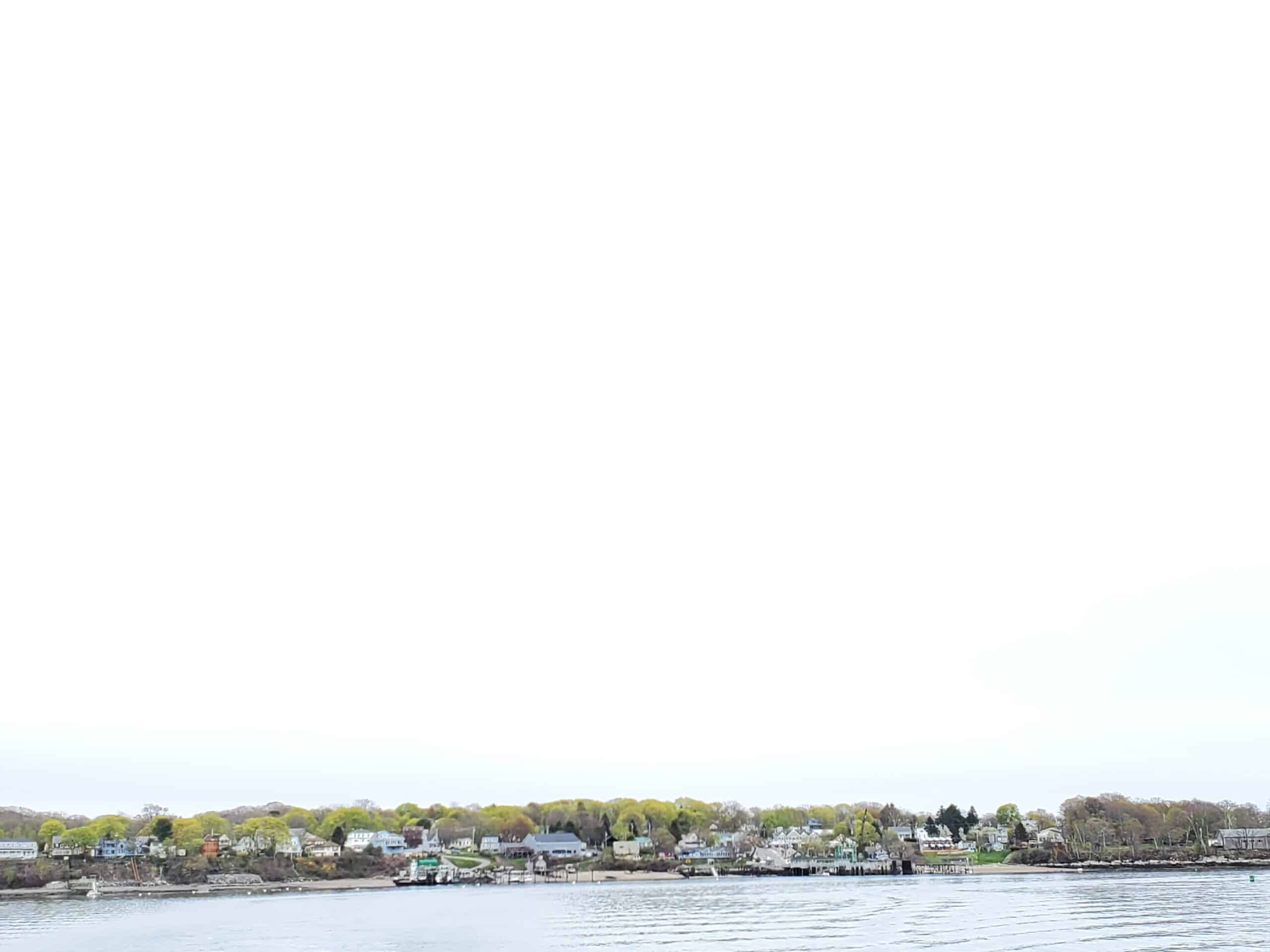 Thank you so much for reading this blog and joining me in my adventures! Make sure to check out my other blogs and contact me when you are ready to travel domestically or internationally. I am here to you to curate a trip for you and your friends and family.

Life is better when you’re laughing

#tbt at the Grounds For Sculpture The sculpture

When you are happy and you know it . . . #internat

I found the best kept secret about New Jersey.....

I wanted a walker so bad but they wouldn't give it

And just like that my weekend in Harlem is over.

Have enough courage to start and enough heart to f