Dubai is unlike anywhere else on the planet. With its bold architecture and risky style, the United Arab Emirates’ largest city is a distinct fusion of its Bedouin heritage and an ultramodern style all its own. Dubai doesn’t just live up to its reputation; it will completely exceed your expectations. Explore the glamour, and then uncover the ancient traditions of this multifaceted city.

What to Expect in Dubai?

Language: While Arabic is the UAE’s official language, English is the language of business and is spoken by almost everyone in Dubai.

Climate: Summers are extremely hot in Dubai. Daytime temperatures are sometimes over 106 degrees while nights rarely fall below eighty-eight degrees. Winters are much more comfortable with temps between sixty and seventy-five degrees.

Drugs and Alcohol: Alcoholic drinks are served in licensed hotels and clubs, but it is a punishable offense to drink or to be under the influence of alcohol, in public. There is zero tolerance for drugs-related offenses. The penalties for trafficking, smuggling, and possession of drugs (even residual amounts) are severe

Hotels: It is normal practice for hotels to take a photocopy of your passport or Emirates ID. You can’t stay in a hotel if you’re under 18 years old and not accompanied by an adult.

Offensive behavior:  Swearing and making rude gestures (including online) are considered obscene acts and offenders can be jailed or deported. Take particular care when dealing with the police and other officials.  Public displays of affection are frowned upon, and there have been several arrests for kissing in public.

Relationships outside marriage:  All sex outside marriage is illegal, irrespective of any relationship you may have with your partner in the UK/ USA. If the UAE authorities become aware that you’re conducting a sexual relationship outside of marriage (as recognized by them), you run the risk of prosecution, imprisonment and/or a fine and deportation. It’s against the law to live together or to share the same hotel room, with someone of the opposite sex to whom you aren’t married or closely related.  Please check out this article from USA Today Rules for Unmarried Couples Staying in Dubai Hotels Per the article, Once you’ve checked into a hotel, refer to each other and “husband” and “wife” rather than saying “my boyfriend” or “my fiance.” This could help prevent potential problems.

Same-sex relationships: All homosexual sex is illegal and same-sex marriages are not recognized.

What to Wear in Dubai? 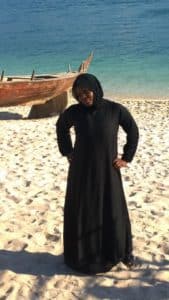 Dress code: Women should dress modestly when in public areas like shopping malls. Clothes should cover the tops of the arms and legs, and underwear should not be visible. Swimming attire should be worn only on beaches or at swimming pools. Cross-dressing is illegal.

Islamic Women Wardrobe: Abaya and hijab are two different kinds of clothing that are available to Islamic women. A hijab or hejab actually refers to the rules of covering up. However, in the usual everyday context, the word is used to refer to a scarf which covers the head. An abaya, on the other hand, can be described as a long robe or cloak, usually black in color. It is worn over the clothing and tends to cover the whole body.  During my 4-days, I adhered to Muslim traditions for women and packed maxi dresses and long scarf to cover my shoulders, arms, and head.

From the Airport: Book Viator -Dubai Private Arrival Airport Transfer.  “Meet and Greet” service was phenomenal especially when arriving around 1 am Dubai time.

Public Transport: It’s forbidden to eat or drink in the metro (and that includes chewing gum!). Cabins are reserved for different categories, like women only and gold class, so watch the signs. Sleeping is not allowed in stations.

Uber: Uber is available in Dubai and the majority of the uber drivers drive in Mercedes.

My preference is staying at hotels especially the chains such as Marriott or Hilton.   During my visit, I stayed at the JW Marriot Marquis.  Depending on your dates of travel, you can get a great rate.  By the way, this hotel is spectuclar.

Dubai City Half-Day Sightseeing Tour:   The tour includes a photo by Burj Al-Arab hotel, on Jumeirah Beach.  Take in views of the white marble dome and minarets of Jumeirah Mosque.  Tour the old quarter of Dubai, Bastakiya, with your local guide.  Enjoy a water-taxi ride across Dubai Creek. Visit the exciting Spice Souq and shop for bargains in Deira Gold Souq

Dubai Desert 4×4 Safari with Quad Ride, Camel Ride, BBQ Dinner and Belly Dancing:   This is one of the best tours as you get to experience being in the desert.

Dubai Mall: is one of the world’s largest shopping malls in UAE.  You can spend hours exploring and shopping.

What to Eat in Dubai?

Brunch: My absolute favorite bunch is from the Jumeirah Al Qasr Resort.

Best Romantic Atmosphere: For a night with that special someone, there’s nowhere like Pierchic.

Persian Food: For some great Persian food, the Shabestan in Radisson Deira is one of Dubai’s top hidden gems.

Best Ambience: Get to Zuma! I also adore Coya and Le Petite Maison.

Below are several spots to check out.  Also, several of the large hotels will have clubs such as the JW Marriott Marquis.   Just remember the rule about alcohol.

10 places to hear jazz in Dubai

It is not Throwback Thursday but FB memory reminde

Sisterhood at its truest form in the City of Broth

Good Morning! It is the first day of Fall and I a